The ‘South Park’ Guys May Launch A Real-Life Tegridy Farms 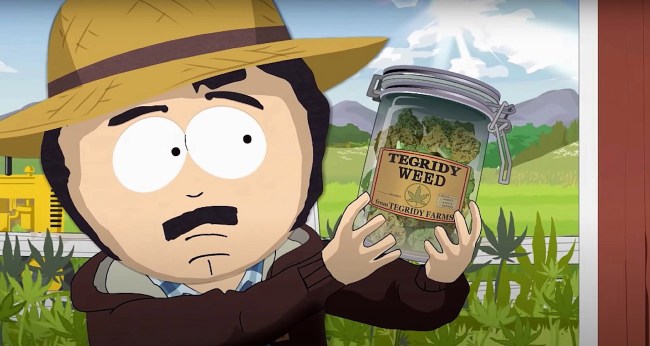 Last week, we brought you the news that South Park creators Trey Parker and Matt Stone had inked a massive new $900 million deal with ViacomCBS that will see the iconic comedic duo produce, at least, six more seasons of South Park and 14 (yes, 14!) additional movies for Paramount+. The deal will run through 2027 and will take South Park through its 30th season.

During a recent interview with Bloomberg, Stone further discussed what this deal means for him and his South Park partner by detailing what they plan on using the money for.

“We’re a media company. We use the proceeds from this to invest. These are multi-year projects we invested a bunch of money in,” Stone told Bloomberg.

“We have a ‘South Park’ 3D video game, release date unknown. We’re doing deep fakes. We have a studio with a dozen people who are deep fake artists. We’re working on a little more of this deep fake movie we’re trying to piece together. We have a horror movie. A musical. I think we’re really for the first time going to bring Tegridy Weed into real life.”

Tegridy Weed, of course, is an element that was introduced into South Park during its 22nd season as Randy Marsh launched his own cannabis farm, Tegridy Farms. Given the branding of South Park and the booming legal marijuana market, a marriage of the two in the real world certainly feels like a no-brainer.

At this time, it’s unclear when the 24th season of South Park will premiere, as no release date has been confirmed. The 23rd season aired back in 2019, with two specials — South ParQ Vaccination Special and The Pandemic Special — releasing in the intervening years.

RELATED: ‘South Park’ Creators Ink New Deal That Makes Company Worth Over $1B — 6 More Seasons, 14 Movies On The Way