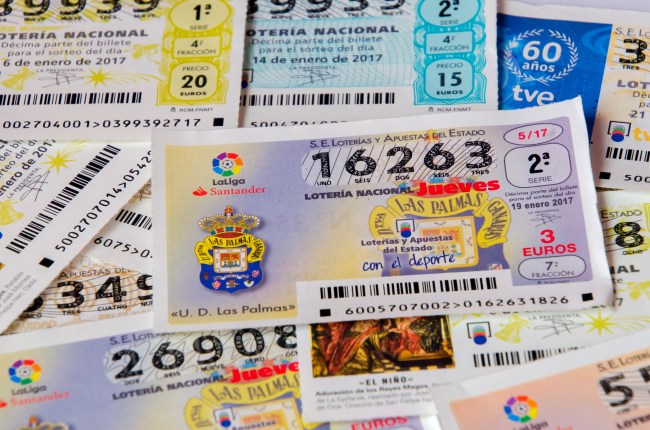 Anyone who’s ever spent money on a lottery ticket has fantasized about what would happen next. Do I buy my next home in Montana or Portugal? How much is too much to spend on a single bottle of whiskey? Where’s the nearest Ferrari dealership? How quickly can I find a Patek Philippe for sale? Do I buy a yacht or a badass fishing boat first? These are just a few things the things crossing my mind at the moment.

For many, that next step after winning the lottery includes immediately calling it quits at work. Most people would do this via phone call, email, text, and/or showing up at work the next day to politely put in your 2-weeks notice instead of boning their coworkers who then have to make up the workload while they find a replacement.

It’s quite rare that anyone gets to witness someone winning the lottery and how they react but that’s exactly what went down in Spain when a TV reporter found out she’d won the ‘lottery’ on live TV. The woman appeared to quit her job with a comment about “not coming to work tomorrow” while holding her winning lottery ticket.

Nobody can really blame her. If she’d won millions of dollars then she could afford to retire on the spot. Only in this instance, she’d won just over five thousand dollars because the winning ticket in her hand only pocketed a small portion of the grand prize.

Here she is speaking wildly after just discovering that she’d ‘won the lottery’ before realizing she’d only won a few thousand dollars, probably less than what she earns per month as a TV reporter in Spain.

Natalia Escudero, who works for public broadcaster RTVE, started screaming on camera – before later learning she had won just €5,000 ($5,550; £4,285).
The Christmas lottery’s top prize is €4m, but can be shared among winners.

Ms Escudero later apologised over the way she reacted during the broadcast.
She said she regretted behaving in such an “emotional” manner and wanted to explain her actions to viewers who “felt cheated”.

Ms Escudero’s response came after she was accused of a lack of professionalism over the footage, which was widely shared on social media.
It showed her jumping for joy while champagne was sprayed into the air as it was announced that the winning number for the top prize in the Christmas lottery known as El Gordo (The Fat One) was 26590.

Viewers criticised her for giving the impression that she had won the maximum prize and for appearing to suggest that she was quitting her job, Spanish media reported.

She responded to the criticism by saying she is ‘going on holiday’ and is staying true to her word of taking some time off from her job.

What I’m struggling with is why anyone anywhere would give her shit for wanting to quit her job if she’d won the lottery. Did anyone really feel deceived that she’d only won five grand and not the grand prize of 4 Million Euros? Were they butthurt that they thought they’d witnessed history but it turned out to be just a person who won a few grand? Or was this just another example of people on social media feeling the constant need to complain about anything and everything?

Let the lady take some time off, spend her five grand on something frivolous like a badass hotel room for a few nights or a small piece of jewelry, and everyone can go back to living their lives.

On another note, I do kind of love this idea of a live national broadcast of a Christmas or NYE lottery across America.

For more on this story, you can click here to visit the BBC.