If You Split A Hotel Room With Your Buddy, Is It Ok To Say Goodnight? 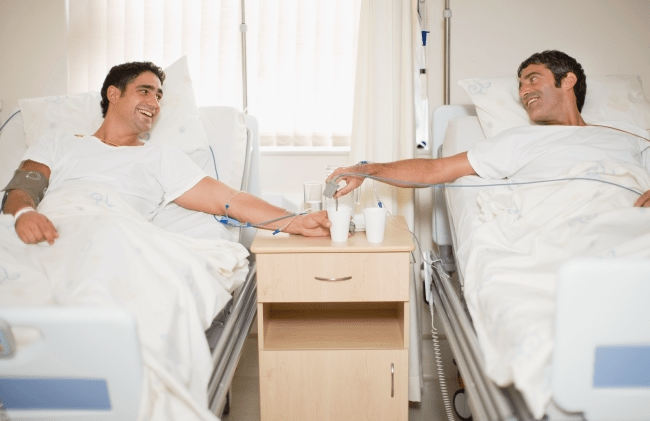 Author’s note: the two men in the featured image of this blog are clearly in hospital beds. That’s because this was about the only stock photo I could find of two men in bed together. Get with the times, iStockphoto.

“Yeah. That’s when he punched me in the face. And the rest is history.”

30 seconds of silence sprawls into two minutes. The darkness beckons the two young men to puncture their covenant of quiet. Were those the last words they would share across the three-foot space between their DoubleTree twin beds? Are we done here? The hum of the air-conditioner kicks out as the climate control thermostat hits its mark. Even quieter now. Both men wonder if there’s more to be said. Both long for some closure to the conversation, to the evening. But due to their sixty combined years of being taught that men should never, ever—and especially not in a hotel room—give voice to a shred of man-on-man intimacy, they lie in rigid silence. And finally, they fall asleep—anxious, miserable, and unsatisfied.

Guys, we’ve all been here. Nobody wants to be the dude who says “goodnight” to another dude with whom you’re splitting a bedroom. You’re putting yourself out there and God knows what’s coming back. Whether you’re stacked in bunks or, heaven forbid, sharing a queen in a summer share house, sending your guy pal to dreamland with the dulcet wishes typically uttered by a loving mother is more than men can handle. Simply put, we’re squeamish when it comes to dude-on-dude intimacy. Maybe there’s some latent homophobia at work there. I’m seeing my therapist Thursday; I’ll ask her.

We broached this subject on our podcast Oops (full episode here). Giulio said he does what a lot of guys do and makes a joke out of it. “Night night, sweetie, sleep well.” Haha yeah, sleep tight little pumpkin, see you in the morning!

No offense to Giulio, but that’s the coward’s way out. Like asking a girl out, getting rejected, and then telling her it was only a dare. It gives you some marginal, fake sense of goodnight satisfaction without being honest with yourself, or each other. Because the truth is, guys want to be wished goodnight. We want that bow tied on the end of a long day. Some sense of finality, for God’s sake!

No more, I say. It’s time we reached down, grabbed our balls, and told our man friends to sleep well. And you better mean it, too. I want you to sleep well, and I expect you to want me to sleep well in return. No more fading off into the dark, holding our breath, hoping that we’ve mutually, telepathically agreed upon the exact moment for the conversation to end.