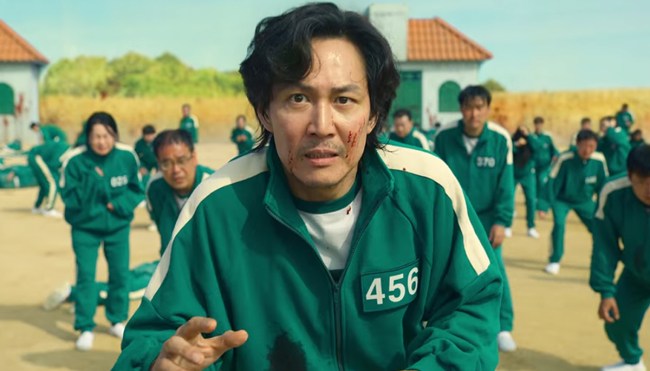 Finally — FINALLY — started Squid Game last night. Watched the first episode. Has my mind been blown in the ways I’ve been promised? Not quite, but I’m sure it’ll come in due time.

One of the main reasons it’s taken me a couple of weeks to finally dive into Squid Game is that I’m intimidated by the language barrier of foreign shows. When it’s a movie, I have no problem given its brevity, but something about consuming an entire series in another language has always felt like such a monumental task — doesn’t matter if I’m using dubs or closed captions. It’s why I still haven’t gotten around to Netflix’s Dark despite the fact that the critically-acclaimed time travel sci-fi series is VERY much up my alley. I’m extremely A.D.D. as it is, which makes concentrating on English-language shows difficult enough in and of itself. Sometimes I’ll even have to leave my phone in the bathroom so I can truly focus. Nevertheless, Squid Game has become such a big phenomenon that, considering my line of work, I simply have no choice.

After speaking with some friends and colleagues who have already crushed the series, I ultimately opted for the dubbed-English route, as someone wisely pointed out to me that half of the characters are wearing masks, anyway. This appears to have been the right decision, as Korean-speaking fans of the show are claiming that the closed captions are incorrect and are therefore altering plotlines and character arcs.

ok i made this really fast so it’s not very good but these are the small examples i could find in ten mins pic.twitter.com/5kIsrlWDjq

The issue first gained traction on September 30, when New York-based comedian Youngmi Mayer tweeted out that the context of the translation was largely incorrect. She said, in part, “I watched Squid Game with English subtitles, and if you don’t understand Korean you didn’t really watch the same show. Translation was so bad. The dialogue was written so well and zero of it was preserved.” The tweet, at the time of publication, has nearly 24,000 retweets.

As explained by Mayer, certain pieces of dialogue are slightly mistranslated, which makes a huge difference when meaning is considered. In one clip, the character says (as told via subtitle), “I’m not a genius, but I still got it work out. Huh.” Translation is close-ish, but upon review from Mayer, she says the line is more like, “I am very smart. I just never got a chance to study,” which, as Mayer explains, is a huge trope in Korean media. It’s not just a mistranslation; it’s a lack of understanding of Korean pop culture. [via Yahoo]

Given that Squid Game is on track to become Netflix’s most popular series ever, it’ll be interesting to see if the streaming giant opens up the hood and fixes the closed captions. In the meantime, though, perhaps stick to the dub.