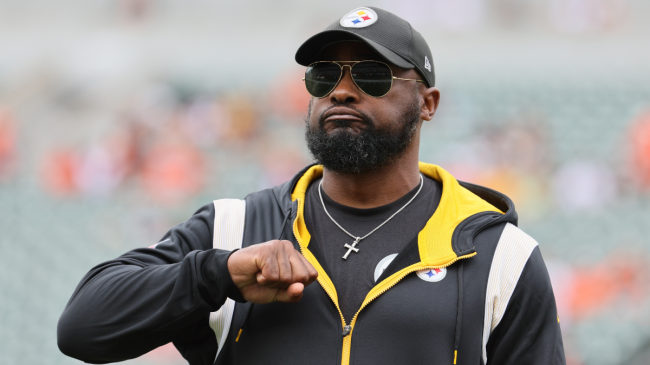 The Steelers jumped out to a 17-3 lead on the road, aided by a pick six by defensive back Minkah Fitzpatrick. Unfortunately, a slow-moving offense allowed the Bengals to get back into the game.

Cincinnati actually appeared to win the game on the final play of regulation, throwing a touchdown to tie it up at 20-20 with an extra point looming. The Steelers blocked the kick, though, sending the contest to overtime.

In that OT session, both teams missed a field goal, but Pittsburgh was able to take advantage on one final possession. Mitch Trubisky marched the offense down the field, giving the Steelers an opportunity to win it on a 53-yard kick on the final play.

As you’d imagine, the Steelers were pumped, and they showed it in the locker room after the victory.

Mike Tomlin and the Steelers were seen dancing to AB’s ‘Put That S— On’ after the big win. For those unfamiliar, the song is the newest release from former Pittsburgh wideout turned rapper Antonio Brown.

The internet reaction was great. Take a look at what NFL fans had to say about the celebration on social media.

One fan speculates AB’s return to the team. He’s let it be known that he’d like to suit up on the football field again, though Mike Tomlin has shot a return in Pittsburgh down.

This fan commented on another former Steeler pass catcher, Juju Smith-Schuster, who was known for his celebrations and following TikTok dance trends. The fan wrote, “Juju wishes he was there.”

Juju wish he was there

Here’s the original move as done by AB.

Big win for the Steelers. Even bigger celebration.