Stephen A. Smith Says Will Smith Is Lucky He Wasn’t Jumped After Chris Rock Slap, Gets Thoroughly Roasted 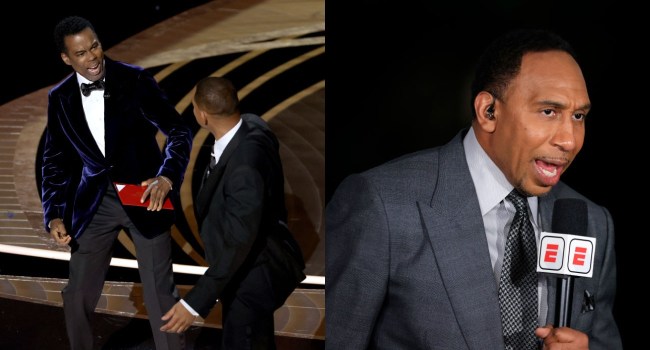 Given that virtually everyone has been chiming in on the Will Smith/Chris Rock situation — Knocked Up director Judd Apatow had a particularly clownish take — it was only a matter of time until ESPN star Stephen A. Smith weighed in.

Smith (no relation to the newly-crowned Best Actor winner) took to Twitter to fire off a handful of tweets about the King Richard star before posting a video in which he expressed extreme disappointment in the 53-year-old actor. All told, video included, Stephen A. tweeted about Smith seven times.

Stephen A. Smith gets roasted for his take about the Will Smith/Chris Rock altercation

There’s no excuse for that, Will Smith. pic.twitter.com/v8u8PtQRMX

“What Will Smith did tonight was straight bullshit,” Smith said in the video. “Props and congratulations to him for winning the Oscar because damn it, he deserved it. And I love the brother and I’m proud of him but, boy, was that a shameful act for him to commit tonight. To go on stage and slap Chris Rock like that? He’s lucky he didn’t get his ass kicked. Particularly after the event was over — if not by Chris Rock, by the fellas he had there with him.”

Stephen A’s take about Will Smith largely didn’t go over too well with his followers as the 54-year-old First Take host got roasted in the quote tweets, with some users particularly mentioning Smith’s reaction to the Ray Rice incident from 2014:

LMAOOO i remember this the same dude that when Ray Rice hit his ol lady he asked “what did she do to provoke him?” LMAOOOOOO THIS GUY IS A CLOWN. https://t.co/cj2PN3w7IY

Interesting how he responds when a man hits a man… But when Ray Rice assaulted his wife Stephen A only asked what she did to provoke him. 🤷🏽‍♂️ https://t.co/uQTC4VZwQb

Bruh you 50 no wife how can you tell someone else https://t.co/iuvDsPuDXK

In terms of Smith cajones, I’d rather be a Will than a Stephen. https://t.co/QkTzdI6aUW

I won't be surprised you have no woman in your life. What sane woman who would want spineless sell out like you? https://t.co/fAJ7Iu1Fu2

Stick to sports my boy https://t.co/HRqrveMUmd

So would its not okay for Will to defend his wife but it’s okay to knock your s/o out in an elevator because obviously she did or said something to make him do it right? https://t.co/cj2PN3w7IY

If there was anybody in the world that I wished would get their a** beat, it's Stephen A. Smith. If I could just be a man for a day I'd do it myself. https://t.co/S1aMDkmTls

Needless to say, Smith is no Denzel Washington, who’s been receiving nothing but praise for how he handled the situation.