Denzel Washington Won The Oscars Without Actually Winning Anything, Reminds Everyone Why He’s The GOAT 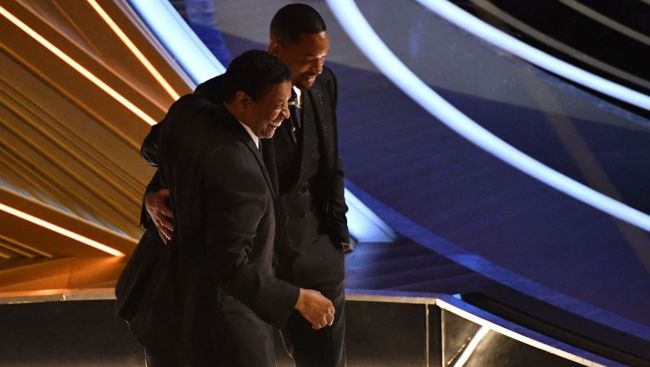 At the Academy Awards on Sunday night, Will Smith — who took home the prize for Best Actor for his performance as Richard Williams in King Richard — smacked Chris Rock in the face for making a joke about his wife Jada Pinkett.

While the incident was undoubtedly shocking, Smith would return to the stage not long thereafter to accept the award for Best Actor.

During his acceptance speech, Smith made a reference to some advice he received from fellow actor Denzel Washington, who could be seen consoling Smith following the incident. Washington was also pictured serving as something of a mediator between Smith and Rock following the altercation.

Denzel Washington is a wise OG for telling Will Smith “at the highest moment becareful that’s when the devil comes for you” 💯 facts. Will and Chris should sort this out… #Oscars pic.twitter.com/CS67YxlhN8

This is Denzel trying to mediate after the confrontation pic.twitter.com/Yri7nrmHma

“Thank you, D. Denzel said to me a few minutes ago ‘At your highest moment, be careful, that’s when the devil comes for you,’ Smith revealed during his speech.

Following Smith’s reveal, movie fans took to Twitter to share their appreciation for Denzel Washington’s greatness, as he’s likely one of the few actors in Hollywood that A) commands virtually universal respect and B) is sharp enough to think of something so brilliant to say in the heat of the moment:

Here’s what I think. I think we should give Denzel the award for Best Actor every year he puts out a movie. The end. #Oscars

“At your highest moment, be careful. That’s when the devil comes for you.“

Only Denzel Washington could turn a chaotic moment and career low for Will Smith into a beautiful moment. That man is the GOAT. #Oscars pic.twitter.com/rec7H53yhu

I prefer to behave like Denzel Washington
In a very uncomfortable and heated moment, he gave wisdom, understanding, correction and comfort. #Oscars2022 pic.twitter.com/gC9vJDmqJu

“At your highest moment, be careful. That’s when the devil comes for you.”

I want an award ceremony where all we do is appreciate and give honor to Denzel.

Can’t get over Denzel Washington simultaneously being the most graceful, wise, and slickest dude on the planet.

Denzel’s comments to Smith came after the 53-year-old actor got on stage and took a swing at stand-up comedian Chris Rock for making a joke about his wife Jada Pinkett’s hair. Rock said that he can’t wait to see Pinkett Smith — who currently has a shaved head due to her struggles with alopecia — in the sequel to G.I. Jane.

Let this be a reminder to all: when in doubt, simply ask yourself “What would Denzel Washington do?”

RELATED: Judd Apatow Is Getting Roasted For Having The Most Absurd Take About The Will Smith/Chris Rock Incident