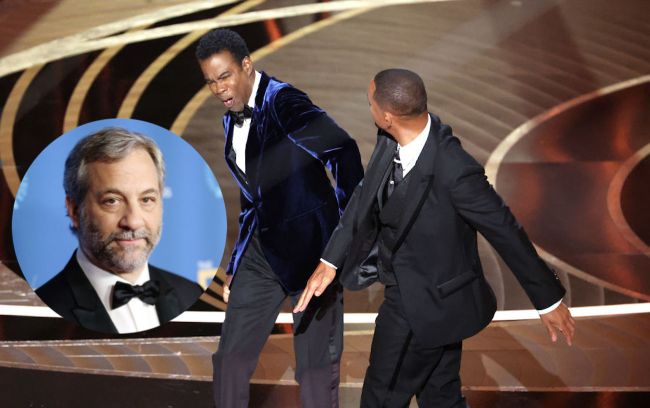 During the Academy Awards on Sunday night, Will Smith shocked millions upon millions of viewers when he walked on stage and struck Chris Rock in the face after Rock made a joke about his wife Jada Pinkett Smith’s hair.

Given the star status of both Smith and Rock, the moment instantly went viral, with everyone from casual viewers to celebrities weighing in with their opinion.

The worst take of the night, though, arguably belonged to The 40-Year-Old Virgin and Knocked Up director Judd Apatow, who fired off a tweet stating that the 53-year-old actor could’ve killed — yes, KILLED — Chris Rock with his open-handed slap. Apatow has since deleted all of the tweets about Smith from his page.

“He could’ve killed him,” Apatow said in the now-deleted tweet. “That’s pure out of control rage and violence. They’ve heard a million jokes about them in the last three decades. They are not freshman in the world of Hollywood and comedy. He lost his mind.”

Apatow actually posted quite a few tweets about Smith last night but has since deleted them all. Here are some of the other tweets that Apatow deleted:

Anyone who missed out on the Judd Apatow tweets. Here you go! Screenshots are forever pic.twitter.com/ItM28yvn3d

After he shared his very bizarre opinion about the Smith/Rock altercation, Apatow got roasted by movie fans on Twitter:

Judd Apatow is carrying on about mythical superhuman Black strength… but let’s talk about your open support for not one but TWO people who have sexually assaulted others… starting with Lena Dunham. @JuddApatow

judd apatow talking about violence and rage after a tiny slap but not about continuing to work with james franco after multiple instances of him being violent against women pic.twitter.com/AYkbXIXPbC

judd apatow rt this is so funny when u remember he let james franco get away with grabbing busy phillips and throwing her on the ground during filming of freaks and geeks then played it off as he was just “getting in character” 🥴🥴 pic.twitter.com/EVfadBrBdp

I think we can all agree that Judd Apatow somehow is the worst person involved in all of this.

Judd Apatow's bitch ass talking about Will like he is a serial killer but mute about his friend Lena Dunham who admitted to molesting her sister. Oh the fucking nerve.

Judd Apatow deleted the tweets, he's famous he knows him and will smith know the same ppl pic.twitter.com/fmxe26zFR8

Judd Apatow getting ratio'd to hell feels like a fitting end to the night! #Oscars pic.twitter.com/AcXZGj7C0m

Actually, Apatow had quite a few tweets about Will Smith that he’s deleted. Wise move because they were strange as fuck.

Regardless of the slap-heard-round-the-world, Smith ultimately took home the prize for Best Actor for his performance as Richard Williams in King Richard.

RELATED: Will Smith May Be Stripped Of Oscar For Violating Academy’s Code Of Conduct After Slapping Chris Rock