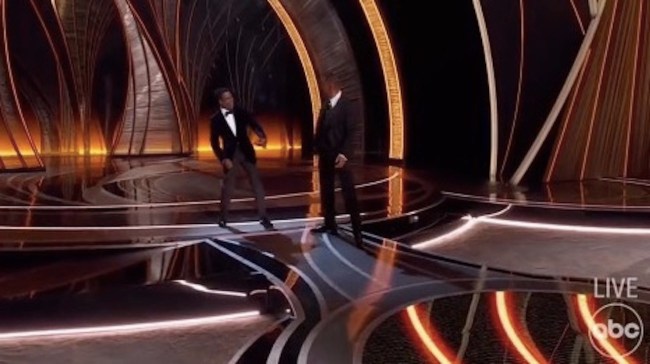 Will Smith, who is up for Best Actor at the Academy Awards for his performance in King Richard, got on stage and struck stand-up comedian Chris Rock in the face after he made a joke about Will’s wife Jada Pinkett Smith. Rock had made a joke about Jada’s buzzed hair, saying that he couldn’t wait to see her star in a sequel to G.I. Jane.

No clue what this was with Chris Rock and Will Smith…. pic.twitter.com/upNVUPxOL3

Will Smith “Keep my wife’s name out your fucking mouth” pic.twitter.com/SBG6bFRvLW

During the commercial break, Will Smith is pulled aside and comforted by Denzel Washington and Tyler Perry, who motion for him to brush it off. Will appears to wipe tears from his eyes as he sits back down with Jada, with Denzel comforting Jada and Will’s rep by his side. pic.twitter.com/uDGVnWrSS2

A couple of minutes after the altercation, Diddy — who was the next presenter after Rock — addressed the incident, saying: “Will and Chris, we’re going to solve that like family. Right now we’re moving on with love. Everybody make some nose.” The camera then cut to Smith who could be seen laughing about the incident.

Rock’s joke about Jada Pinkett wasn’t the first time that the actress was the butt of a joke, as host Regina Hall made an awkward joke mocking the couple’s open marriage earlier in the ceremony.

“Will Smith, you’re married and but you’re on the list and it looks like Jada approved you, so get up on here,” Hall joked.

In addition to Smith, Benedict Cumberbatch, Andrew Garfield, Javier Bardem, and Denzel Washington are up for Best Actor.

RELATED: Things Get Awkward When Regina Hall Jokes About Will Smith’s Open Marriage With Jada Pinkett-Smith At The Oscars