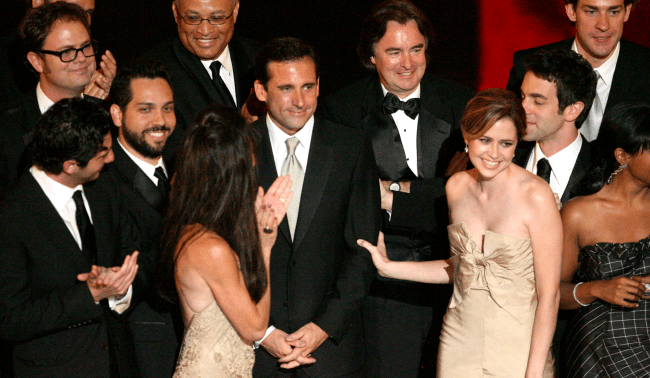 Oscar Nunez, Kate Flannery, and showrunner Greg Daniels of The Office, recently took a look back at the day the show’s star Steve Carrell exited the series.

It was 10 years ago, on April 28, 2011, that Carrell appeared for the final time as a regular on the show in the iconic role of Dunder Mifflin Scranton’s boss Michael Scott.

Speaking on a video call with Yahoo Entertainment, Nunez recalled the feeling on set as they shot the two-part episode “Goodbye Michael.”

“It was like, ‘Wow, the show’s over, and now we’re going to do another show without Steve,'” recalled Nunez. “Someone’s going to come in and be the boss. The Office was over: Steve left, and now it’s another show. It was fun, meeting those people was great, but when Steve left, it was very sad.”

“People were crying all over the place,” Nunez continued. “It was very emotional.”

According to Nunez, things got so bad that at one point Daniels had to jump in and remind everyone they still had a job to do.

“The hardest part was just saying to the actors, ‘This is a comedy show, you can’t cry in every scene with Steve! Try to care a little bit less,” said Daniels.

Thankfully, Nunez pointed out, they had Will Ferrell there playing Deangelo Vickers, Michael’s somehow even more inept replacement at Dunder Mifflin, to help keep things light.

At the farewell party, Kate Flannery says Carrell arrived with gifts for the cast.

“When Steve left The Office, he gave everybody a Rolex watch,” said Flannery, gesturing to the timepiece on her wrist. “I still wear it. It reminds of me that amazing experience.”

Nunez also received a Rolex from Carrell, but says he did not hang on to the parting gift Michael Scott gave him on the show, but he wishes that he had.

“It looks like it was made by a 2-year-old monkey on a farm,” said Nunez. “And he just accepted it!”

Damn. I still miss watching new episodes of this show.