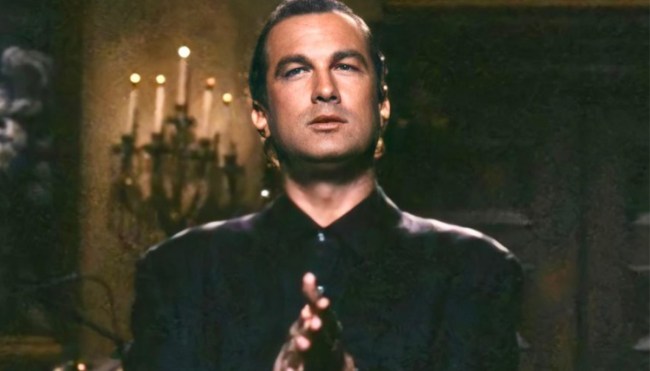 Steven Seagal is one of the most fascinating human beings on the planet, as the martial arts instructor-turned-actor featured in celebrated titles like Under Siege 2: Dark Territory and the reality show that followed him during his time as a real, actual law enforcement officer deputized by a Louisiana sheriff managed to blaze a pretty successful career as an action star despite his inability to run like a normal person.

The man who owns a bulletproof house in Arizona is also one of the more fascinating characters in an industry filled with eccentric personalities—one where he hasn’t exactly made a ton of friends and is viewed as a notoriously difficult person to work with thanks to a borderline delusional sense of self-importance and steadfast refusal to operate by anyone’s rules but his own.

That reality was on full display when Seagal hosted Saturday Night Live on April 20, 1991, as his wooden performance and decision to agree to helm a sketch comedy show despite showing zero indication he understood the concept of “comedy” led to an absolute trainwreck of an episode that was subsequently pulled from syndication.

Following the debacle, Lorne Michaels permanently banned Seagal from returning to Studio 8H and went on to say he was the “biggest jerk” to ever appear on SNL during a monologue Nicolas Cage delivered when the actor hosted it the next year.

During a recent chat with Howard Stern, former SNL writer Bob Odenkirk shed some light on what went down in the week leading up to that ill-fated episode, as the Better Call Saul star revealed Seagal was not a fan of an idea that was originally floated for one sketch and forced the show to hire multiple stuntmen for another that ended the night on an appropriately underwhelming note.