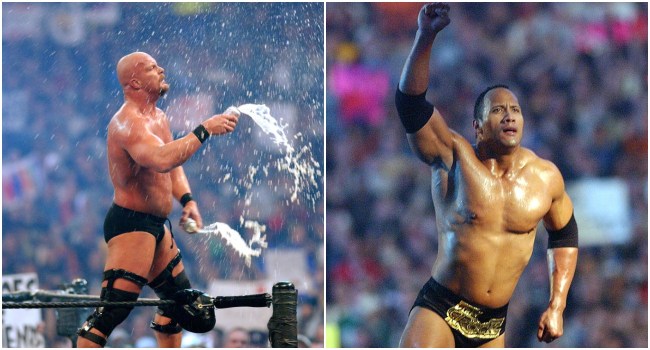 The iconic WWF rivalry between The Rock and Stone Cold Steve Austin was a crucial part of my childhood. Born in the year 1993, I was in the midst of my transition from being an innocent boy to an obnoxious pre-teen during the apex of the WWF’s infamous Attitude Era, arguably the greatest period in the company’s history. And at the crux of that generation-defining era were two of the biggest stars the WWF (now WWE) has ever boasted: Dwayne “The Rock” Johnson” and “Stone Cold” Steve Austin.

You simply had to be there. https://t.co/fTT76T3phP

To match their physical capabilities, both The Rock and Stone Cold were the ultimate performers, as their strength was equally matched by their wit. These guys *just knew* how to put on an electrifying show, which is perhaps best epitomized by the hilariously famed way The Rock would sell the effects of Steve Austin’s legendary signature move, the Stone Cold Stunner.

I, obviously, am not alone in my nostalgia-soaked affection for the WWF’s Attitude Era (particularly the rivalry between The Rock and Stone Cold), as Twitter user @allan_cheapshot did folks like you and I a massive favor by creating a supercut of all the times Stone Cold KO’d The Rock with a stunner.

All of the times that Steve Austin has hit the Stone Cold Stunner on The Rock. pic.twitter.com/YNfGOrul9N

A few years back, The Rock actually addressed why he always put such absurd commitment into selling stunners, revealing that his primary goal was to try and make Steve Austin crack:

Good Lord this was an awesome time in pro wrestling. Electrifying crowds! 👀
the crazy stunner bumps I would take started by me trying to make @steveaustinBSR laugh. If it weren’t for the crowds going batshit you could here Steve say “Jesuuuus Chriiist” 😂 🍻 #ohhellyeah @WWE https://t.co/xrUOqeDzrP

It just goes to show that, even while creating one of the most storied rivalries in the history of professional wrestling, guys, ultimately, will be dudes.

RELATED: Dwayne Johnson Explains Why, And How, He Changed His Name To ‘The Rock’ While In WWE