Dwayne Johnson Explains Why, And How, He Changed His Name To ‘The Rock’ While In WWE 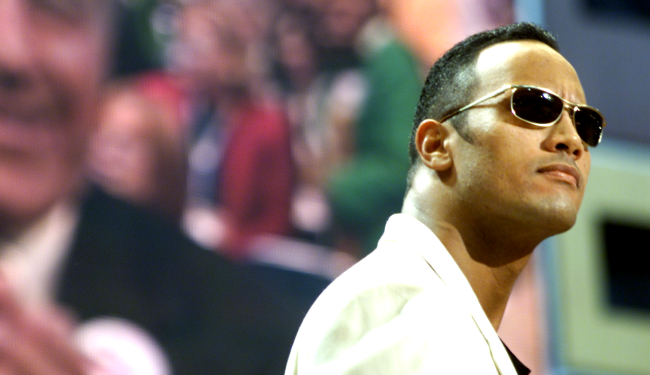 As many longtime pro wrestling fans know, when Dwayne Johnson first appeared in the WWE, then known as the World Wrestling Federation or WWF, the name he used was Rocky Maivia.

The name was given to him by WWE head honcho Vince McMahon who had decided to combine the first name of Johnson’s dad Rocky with the last name of his grandfather High Chief Peter Maivia.

Fans at first didn’t know what to think of him, and the name, not to mention his terrible haircut (“I got a f—ing Chia Pet on my head,” The Rock called it.) and attire, as he made his debut against Crush and Goldust at Survivor Series in 1996. When all was said and done though, the fans ended up chanting his name.

Which, while cool for Johnson, wasn’t exactly the name he was wanting the wrestling fans to chant. Because he hated it. And eventually, so did the fans who turned on him, until one day, when decided to lean into the hate and joined The Nation of Domination.

“The birth story of The Rock, is before I do what I do now, many moons ago, I used to throw around 300 pound men for a living, and get my ass kicked,” Johnson explained on WIRED’s Autocomplete Interview. ” And then my original wrestling name was Rocky Maivia, which was a combination of my dad’s first name and my grandfather’s last name because both of them were pro wrestlers.

“So, my name became Rocky Maivia, and when it was first pitched to me from Vince McMahon, he said, ‘I got your name and I want it to be Rocky Maivia. Now, what do you think?’

“I say, ‘I hate it. I hate it.’ I hated that name because… the lineage I had gave me the opportunity to at least knock on the door, but I wanted my own identity, my own space. So I was very proud to come from who I came from, with my dad and my grandfather, my whole family’s in wrestling. I still wanted my own space, so I said I hate it. He said, ‘Okay, great, well that’s your name,’ and I went, ‘Okay.’ So I embraced it and I did it, and that name did not stick.”

“And eventually, when I became a bad guy, it got truncated down to The Rock,” he continued. “And a guy who was my father figure, and I’ve talked to you many times about him, Pat Patterson, was a mentor of mine in pro wrestling. I lost him last year when I lost my dad at the same time, I lost my father and my father figure in the same year.

“And he said, what if we call you The Rock? He’s a French guy, he had a tough French accent. I said, I love it! And he goes, okay, you’re The Rock.”