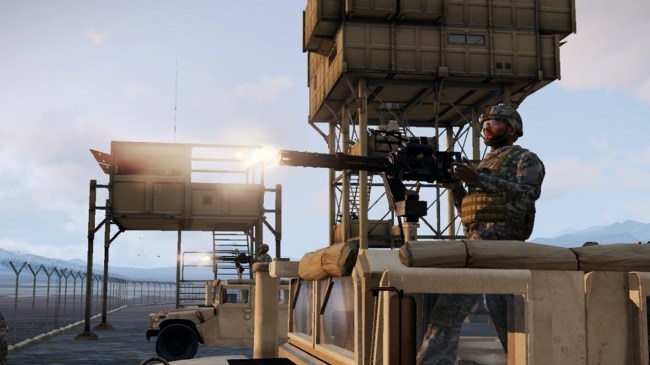 We are getting closer to the Area 51 raid and the hype has not died off. Motels closest to the top-secret military base have sold out. But people planning to storm the top-secret military base might want to watch these video simulations on how the Area 51 raid could go down. Spoiler Alert: It ends very, very badly for people storming the highly classified United States Air Force facility in Nevada.

The Nevada Test and Training Range (NTTR) in the Mojave Desert is a heavily fortified USAF base that has plenty of firepower. The Nellis Air Force Base is where U2 and A-12 spy planes were tested. It is also where conspiracy theorists believe the U.S. government is hiding UFO spaceships and imprisoning aliens.

The extremely viral “Storm Area 51, They Can’t Stop All of Us” Facebook event is scheduled to go down on September 20 between the hours of 3 AM and 6 AM PDT. “If we naruto run, we can move faster than their bullets,” the description of the event states. “Lets see them aliens.”

Over 2 million people have said that they are going to the Area 51 raid and an additional 1.4 million are interested in finding aliens. The USAF has already issued a stern warning to people who think it is a fun idea to storm a military base.

“[Area 51] is an open training range for the U.S. Air Force, and we would discourage anyone from trying to come into the area where we train American armed forces,” said U.S. Air Force spokeswoman Laura McAndrews. “The U.S. Air Force always stands ready to protect America and its assets.”

The raid is titled “Storm Area 51, They Can’t Stop All of Us.” But according to these simulations of the alien-hunting extravaganza, the U.S. military can very easily “stop all of us.”

Some genius gamers created simulations on what an Area 51 raid would look like and oh boy, all of the Kyles and all of the Chads won’t get to clap not even one alien buttcheek.

Using the Arma 3 video game, YouTuber OperatorDrewski gives us a sneak peek at what storming Area 51 might look like. Civilians get their asses handed to them by the military and it is an absolute bloodbath.

YouTuber Banned Inc. also created a Storm Area 51 video and it turns out that a Naruto run is not faster than an M4 carbine round. The video game simulation features civilians in Mad Max-like vehicles and on electric hoverboards storming the military base. There are even people dabbing as they storm the base because of course there is.