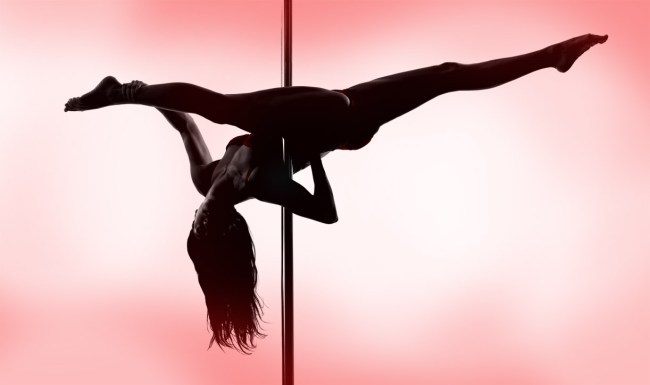 Exotic dancer Genea Sky was performing at XTC Cabaret in Dallas when she fell 15 feet off the stripper pole, slammed into the floor, and continued to twerk with a broken jaw… like a champion.

After her video went viral, Sky took to social media to confirm that yes, that was her who fell off the pole and continued to dance, and yes, she really screwed up her face when she hit the floor after messing up the timing during her performance.

Yes, I fell off the pole.
Yes, I fractured my jaw.
NO, I’m not fucking okay.
And there’s absolutely NOTHING funny about this situation. This is the worst pain I’ve ever felt and I wouldn’t wish it upon anyone.

“I wasn’t fucked up. I do the same tricks every night. I simply messed up this time around and that was the result. The end,” Sky tweeted.

I wasn’t fucked up. I do the same tricks every night. I simply messed up this time around and that was the result. The end.

Pretty easy to see how she ended up injuring herself when you watch the video.

Sky went on to post a video in which she said she has to have surgery on her jaw, sprained her ankle, busted some teeth and had to have stitches as a result of the fall.

“I’m just really overwhelmed by all the messages,” said Sky. “I’m so thankful for all the positive messages I’ve been getting and all the love. It really means a lot so that’s why I decided to post this video, just to say thank you and to let you guys know that I am having a hard time but I am okay and I’m gonna be okay. It’s a really humbling experience to just be alive… that’s just what’s most important to me at this very moment… Even with my injury to my face it still could have been a lot worse.”

People keep asking if I have cash app and Venmo and all that…I only have cash app ($geneapurnell22) and the GoFundMe my best friend made for me. I’m not asking for money but I’m very grateful that so many people want to help me. It truly means the world to me rn. Thank you 🙏🏽💕

If you want to donate to the GoFundMe set up by a friend of hers, you can do so here.

I wish I could individually respond to each person but my phone has been flooded all day. So thank you to EVERYONE who has reached out & continues to do so. Your guys’ kind words are so helpful and uplifting. I can’t say “thank you” enough 🥺

I will be posting updates of my progress on here and my Instagram. And as soon as I’m healed and cleared to work again, I will be right back at XTC Cabaret in Dallas, TX putting on the same show 👏🏽

21 Savage even reportedly commented on the video when he learned she was dancing to his song “Immortal.”

“She got right listening to that immortal,” he wrote.