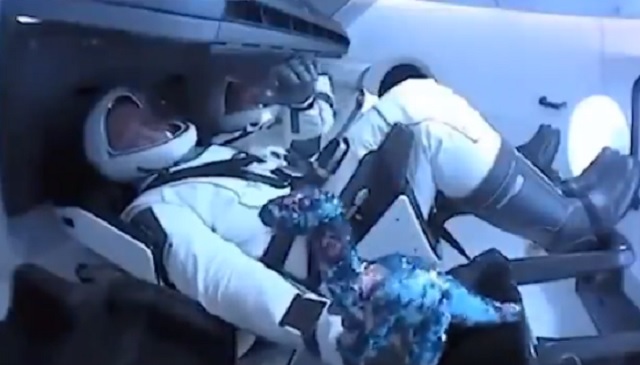 Astronauts Bob Behnken and Doug Hurley had a special guest during their historic flight to space.

During Saturday’s NASA/Space X launch many noticed a stuffed dinosaur plushy hanging out inside the cockpit alongside Bob and Doug.

That purple stuffed dinosaur is cooler than I'll ever be #SpaceX @elonmusk pic.twitter.com/TorWPIhfuF

What is the significance of the plushie toy strapped in next to @AstroBehnken on the #SpaceX rocket? Does it have a name? #LaunchAmerica #LaunchDay @NASA pic.twitter.com/Ie1d8bYpKD

Toys have always flown alongside astronauts and are used as “zero-g indicators” during flights. When the toy starts floating, it’s a sign that they’ve reached zero-g and are experiencing weightlessness.

The toy was Bob and Doug had onboard their flight has been identified as a TY Flippables Tremor Dinosaur.

If so, it’s a retired plushie that is no longer manufactured, so you can only acquire it on the resale market. pic.twitter.com/k51gJfHbP2