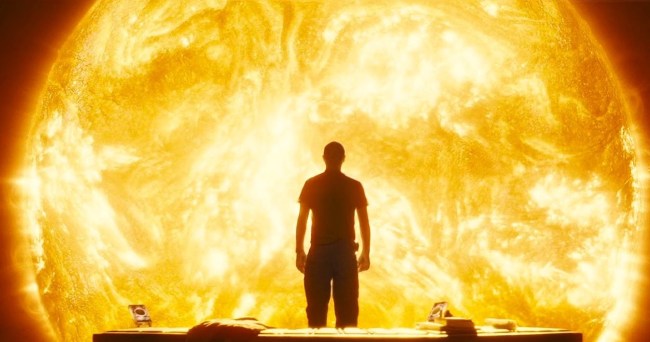 Already heard of Sunshine? Congratulations, you have a fine taste in film. Never heard of Sunshine? I clearly don’t blame you as the entire point of this article is to bring some attention to this criminally underrated and underseen 2007 sci-fi psychological thriller.

Directed by Danny Boyle — the mind behind films such as 28 Days Later, Slumdog Millionaire, and Steve Jobs — and written by Alex Garland, the director of Ex Machina, Annihilation, and Devs —Sunshine boasts one of the sneaky-best-sci-fi-casts of the last twenty years, as it features a pre-Captain America Chris Evans, a pre-Peaky Blinders Cillian Murphy, Rose Byrne, Mark Strong, Cliff Curtis (the gangster from Training Day who spares Ethan Hawke’s life), Benedict Wong (Dr. Strange’s buddy), Hiroyuki Sanada (the main samurai from The Last Samurai), Troy Garity (the agent on Ballers), and Michelle Yeoh (Crouching Tiger, Hidden Dragon). These days, that’s the sort of cast you’d see in a massive blockbuster film set in the Marvel Cinematic Universe.

Sunshine follows the crew of the Icarus II, a ship tasked with the mission of reigniting our dying sun a nuclear bomb the size of Manhattan in order to rescue life on our rapidly-freezing Earth. Obviously, given that the ship is the second iteration of the Icarus to be sent into the reaches of the great unknown, this is humanity’s second attempt at reigniting the sun after the original Icarus disappeared under mysterious circumstances. Since I don’t want to risk spoiling the plot any further, I’ll let the film’s official synopsis do the talking:

In the not-too-distant future, Earth’s dying sun spells the end for humanity. In a last-ditch effort to save the planet, a crew of eight men and women ventures into space with a device that could revive the star. However, an accident, a grave mistake and a distress beacon from a long-lost spaceship throw the crew and its desperate mission into a tailspin.

Despite taking place in the vast and mind-bending landscapes of outer space, Sunshine is just as much of a thriller as it is a classic sci-fi flick, as the uncertainty of what happened to the Icarus I provides the film’s most compelling plot point.

Sunshine, made for a stunningly cheap $32 million, is also an absolutely breathtaking film both in cinematography and emotion, as the film is not only full of eye-opening visual splendor, but its concluding moments provide as heavy of an ending as you’ll find in the science fiction drama. Christopher Nolan wishes the ending of Interstellar hit home this hard.

While Sunshine is unfortunately not currently on any of the major streaming services, it can be rented on YouTube or Amazon Prime for $3.99. And if you wanted to get creative, I’m sure you could figure out anterior ways to watch the flick. Just take my word for it, if you’re a fan of sci-fi, thrillers, or both, Sunshine ranks up there as an absolute must-see.