Swan Harasses Neighborhood By Knocking On Doors All Day Long 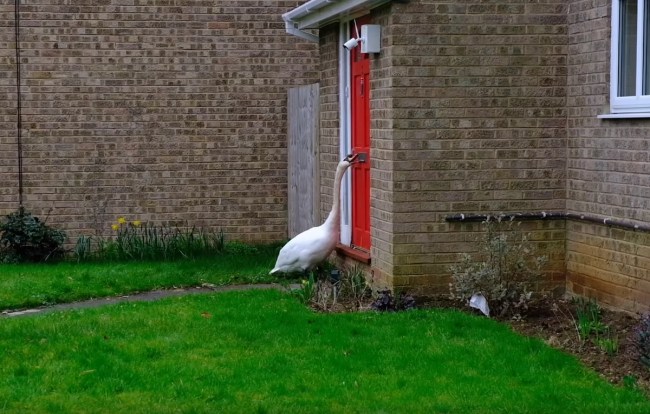 Living next door to an awful neighbor can make life a nightmare but a town in the UK is living with a different kind of rowdy resident – a swan named Cedric who won’t stop knocking on doors all day.

Homeowners on a street in Northampton have no idea why Cedric knocks on doors all day but admit it’s slowly driving them crazy.

One of the homeowners, Stephen Legg, told Metro.co.uk that Cedric “doesn’t do any damage, but it’s extremely irritating.”

“He starts by rattling the letter box, then bashes the metal with its beak quite loudly,” Legg said.

Sometimes Cedric just knocks once or twice and gets lost, but other times, the bird will knock for UP TO THREE HOURS.

Here’s a clip of Cedric in action.

Another neighbor, Wendy Howard, called Cedric’s habit “pretty funny” but the swan never bothers her house. “But I’m glad it isn’t my house because it is very noisy,” she noted.

Legg said he’s previously contacted the RSPCA who suggested the swan is “trying to scrape insects off the glass.”

Legg has tried everything to keep Cedric away, minus a shotgun.

“I did have a device that makes a swan-repellent ultrasonic noise, but it actually seemed to quite like it. He just nestled up to it, so it did no good at all and even might’ve encouraged him.

It cost me thirty quid so it was a complete waste of money.

I did try covering the whole door but I didn’t get any post for a whole month.

If it keeps on through the whole summer I will have to cover the door again and leave my conservatory window open for the postman.”

Luckily, Cedric knocking only happens in the summer.

“He does it every year [in] the summer, then doesn’t bother for the rest of the year,” explained Legg.