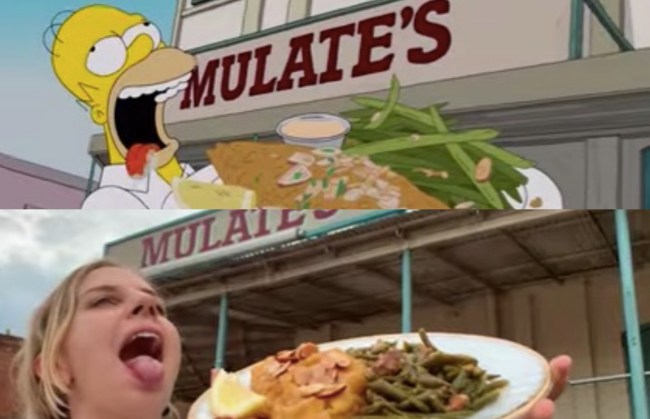 Homer Simpson is a man who loves his food. I see a lot of myself in Homer because there aren’t too many things on this planet I’ll stop myself from eating and when I’m not eating I’m often thinking about what I’ll be eating next, to the point that I often stalk the menus of restaurants ahead of time.

I saw this clip earlier in the week when our former colleague Brett ‘@TheCajunBoy‘ (a New Orleans resident) shared this on Twitter but I didn’t get around to watching the video until this morning when I saw it trending on Reddit. In this clip, two Swiss tourists recreate this epic scene from The Simpsons and go shot-for-shot with Homer Simpson.

They’ve set the video as a wide-angle so you can see the side-by-side of Homer Simpson eating NOLA’s finest Muffuletta, Po-Boys, Crawfish, and everything else in between. If you’re not hungry right now you will be after watching this:

True story: Central Grocery’s Muffuletta was the first I ever had in NYC.

I have been chasing this muffuletta since 2004, no where comes close. I did not make it to Di Martino's (my original family name) so am willing to believe a competitor can be found. pic.twitter.com/YPp7Yh64vg

I’ve only been to New Orleans a handful of times in my life but I was more than a little impressed with myself for how many of these restaurants and stores I’d eaten at in the six or seven times I’d visited the city. Every time I’m in town I try and eat at Brennan’s (for brunch), Antoine’s, and get Pascal’s Manale BBQ shrimp.