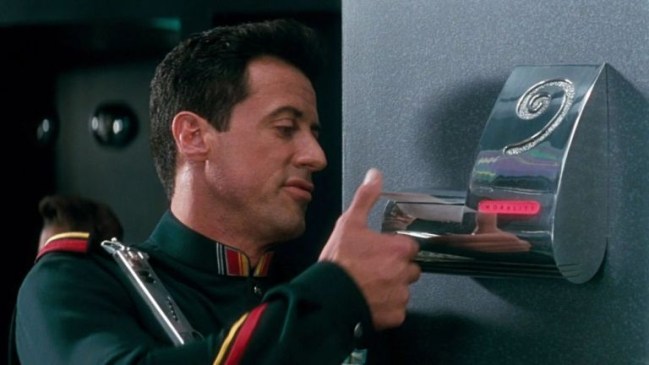 In the 1980s, Hollywood fell head over heels for a new genre that would take the world by storm in the form of science-fiction movies imagining what the future of law enforcement could look like with the help of some of the biggest names in the industry starring as the cops tasked with patrolling the streets of varyingly dystopian societies.

Blade Runner is perhaps the most beloved film in this particular realm but I’ve personally gotten more enjoyment than I probably should from some of its less critically-acclaimed counterparts that take themselves far less seriously, as Harrison Ford never shoots anyone in the dick like RoboCop‘s eponymous protagonist does, and while he may have a car that flies, it couldn’t transport him between eras like Jean-Claude Van Damme’s could in Timecop.

Sylvester Stallone spent the 1980s gearing up to get in on the action by playing a present-day police officer in both Cobra and Tango & Cash, and when the following decade rolled around, he set his sights on the future with a couple of projects—including one that featured him playing the title character in Judge Dredd.

That movie wasn’t exactly a masterpiece—a fact made even more evident by the 2012 reboot that arguably was—but there is one other that has managed to hold up a hell of a lot better: Demolition Man.

Is Demolition Man an objectively good movie? No, and if you go into something where Stallone plays a cop who is cryogenically frozen before waking up in 2032 to a society that will only remain crime-free if he can stop an evil Wesley Snipes (who was frozen alongside him) expecting a timeless piece of cinema, you’re just setting yourself up for disappointment.

The future depicted in Demolition Man is purposefully absurd, as everybody knows there’s no way the world could ever reach a point where human contact is basically a thing of the past and a lack of toilet paper has led to people using seashells to maintain their undercarriage.

If 2020 has taught us anything so far, it’s that those predictions may not have been as far-fetched as we may have previously thought, and while it’s been almost 20 years since Demolition Man was released, it’s suddenly more relevant than it ever was.

It appears Stallone has realized there’s no better time to revisit that world, as he addressed the possibility of a sequel while fielding some questions over the weekend and revealed Demolition Man 2 is officially in the works at Warner Bros.

It’s unclear what stage of the development cycle the project is in, but considering this is the first we’ve really heard of it, it seems fair to assume we’re going to have to wait a while for everything to come together. I just hope that when it’s done, it manages to blow us all.

Um, away. Right. Blow us all away.