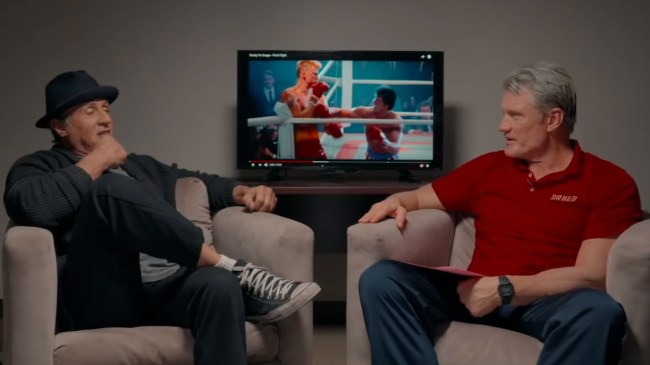 Talk about your ultimate bro bull sessions, it doesn’t get much cooler than Rocky Balboa (Sylvester Stallone) and Ivan Drago (Dolph Lundgren) sitting around, shooting the sh*t, talking about their days shooting the legendary film Rocky IV.

The best part of this video might be when Lundgren questions Stallone casting him in the iconic role, and explains once he saw Dolph’s photos he knew that he was the man for the job.

“I said, ‘Everyone’s gonna hate this guy, because he’s flawless. He’s 6-foot-6 and no flaws, no weaknesses.’ I said, ‘This is interesting, because Rocky’s just the opposite. He’s really flawed. He’s a throwback, and you’re a throw-forward. And we both can fight and we both got styles that were perfectly contrasting.'”

WARNING — SPOILER AHEAD, that you probably already know if you have watched any of the Rocky movies.

Related to this video, Lundgren recently talked about how he almost didn’t come back for Creed II, and also discussed with SlashFilm a scene that they shot that didn’t make it into the film.

At the end, after the fight, Adonis and Rocky are walking back and they see Ivan taking the wraps off his son’s hands and kind of comforting him. He’s feeling bad for losing. I leave the room and Adonis walks in and talks to my son. I come back in and we have a moment, me and Adonis, and then I have a moment with Rocky after that. That was taken off. Maybe it was too much or maybe it was too emotional or too soft. Maybe redemption comes next time around.