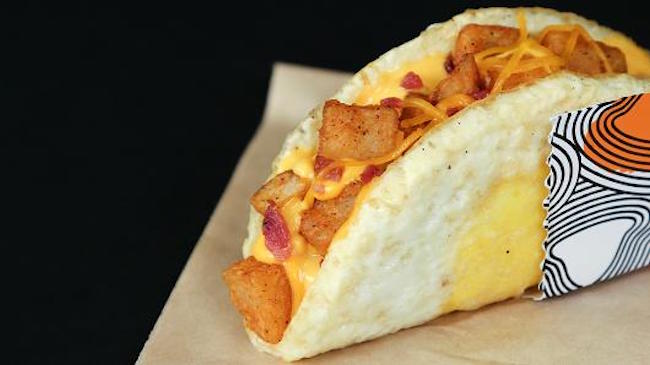 In 2012, we all applauded when Taco Bell unveiled the Doritos Locos Taco, a food which is inarguably one of the wonders of the modern world. The creation came just a couple of years after the debut of the KFC Double Down, and it was becoming clear that we were entering a new culinary era where anything was possible, Unfortunately, nobody could have predicted the monster we’d accidentally created.

The mad scientists in the Taco Bell corporate kitchens soon became mad with power, unleashing ungodly creation after ungodly creation onto an unsuspecting world. It was only a matter of time until we were subjected to a Cooler Ranch version of the aforementioned taco, a fried chicken chalupa, and— most recently— a burrito with spicy pop rocks inside.

Taco Bell even decided to start serving breakfast a few years back in an attempt to lure in customers who are looking for a reason to hate themselves before 10 AM. This is especially true of anyone who’s brave enough to try the Naked Egg Taco, the latest in a long line of culinary crimes committed by the company.

The taco, which will roll out nationwide starting August 31st, features a fried egg for a shell that contains hash browns, cheese, and bacon or sausage. Customers are given the option to cover up the egg with a gordita shell, an option that will surely land you in hell for the deadly sin of gluttony.

The taco will cost $1.99, but as Mashable notes, diners who really want to regret their decision to get Taco Bell for breakfast can add a coffee, two Cinnabon Delights, and a hash brown for another $2.

If—for some weird reason—you can’t wait to try the taco, you’ll also be able to make reservations at certain locations on OpenTable, because this is apparently the world we’re living in now.

May God have mercy on us all.