Taco Bell Threw Away 2.3 Million Pounds Of Beef After A Customer Found A Metal Shaving In An Order 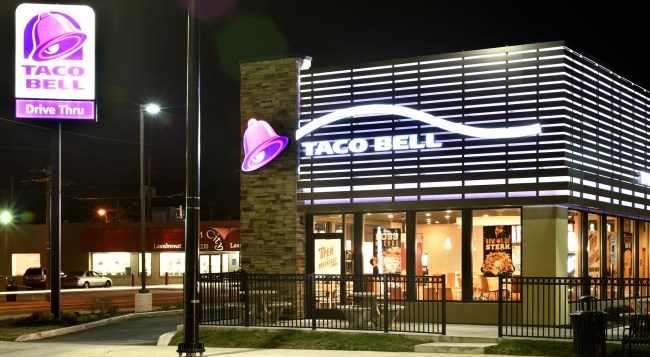 I’m not sure what’s a bigger tragedy, a marijuana producer being forced to destroy $58.2 million worth of pot to be in regulatory compliance, or Taco Bell having to throw away 2.3 million pounds of delicious seasoned beef because a customer allegedly found a metal shaving in something they ordered. (Funny how those two things go so great together too, huh?)

The latter is the reason why if you tried to get yourself a Beefy 5-Layer Burrito or a Beefy Nacho Griller over the weekend or on Monday you were turned away empty.

Which is exactly what happened to Taco Bell customers in 21 states after the U.S. Department of Agriculture’s Food Safety and Inspection Service (FSIS) was alerted that a customer found a metal shaving in their Taco Bell meal.

According to a USDA press release dated October 14, “There have been no confirmed reports of adverse reactions due to consumption of these products. Anyone concerned about an injury or illness should contact a healthcare provider.”

On Tuesday, October 15, Taco Bell issued their own statement which read, in part, “The problem was discovered when a customer reported they found a metal shaving in their menu item. To ensure the safety of our guests, the company immediately partnered with the supplier to shut down the supply chain, remove the product from restaurants and distribution centers and notify the USDA.”

“Nothing is more important than our customers’ safety, and nothing means more to us than their trust,” said Julie Masino, President of North America, Taco Bell Corp. “As soon as we received the first consumer complaint, we immediately acted to remove the product from the affected restaurants and proactively worked with the supplier to inform the USDA of our steps to protect our guests.”

Taco Bell, which serves 290 million pounds of ground beef every year, according to its web site, was reportedly having their restaurants suggest chicken or steak as an alternative to beef prior to the announcements, leading many Taco Bell customers to question why beef was suddenly not available.

Hey @tacobell can you guys be real about what’s going on with your beef. I love eating there and the secrecy of what’s going on makes me afraid to ever eat at your restaurant again

Taco Bell is pulling its beef 👀 until they can replenish its supplies. Says it didn’t meet its quality standards! How bad was that shit?? 🧐

@tacobell what’s the deal with running out of beef in Ohio? Second time today I went to a Taco Bell for a taco and they are out off BEEF!

I ordered postmates and Taco Bell was completely out of beef….. pic.twitter.com/aj6tbOJBUZ

This Taco Bell claimed to be out of beef!? Like how does that happen!?

Still stuck on how Taco Bell out of beef😒

1220 on a Saturday and taco Bell doesnt have beef. Rip

just went to taco bell in niles and they said they were all out of beef chicken and tortillas… pic.twitter.com/IfHX4LLtOW

update: apparently there’s a shortage of beef at Taco Bell… yo like you should just close???

THIS TIME I GO TO TACO BELL THEY ARE OUT OF BEEF AND CHICKEN. WTF?!? “BUT WE DO HAVE VEGETARIAN OPTIONS” WTF DO I LOOK LIKE FUCKING VEGISTABLES ARENT GOING TO SUSTAIN MY FIGURE