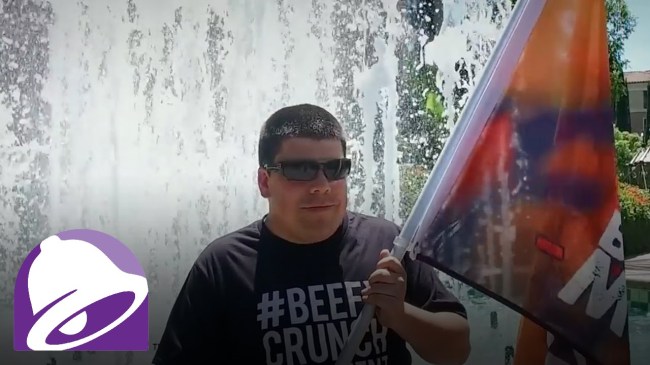 A few weeks ago, we told you about how rabid Taco Bell fans brought back the Beefy Crunch Burrito to restaurants nationwide after a three-year hiatus. The return of the Beefy Crunch Burrito and Cheesy Double Beef Burrito in May was enthusiastically celebrated around the country, with fans flooding Instagram and Snapchat about their gleeful reunions with their beloved burritos.

The man who made this all happen is Richard Axton, the leader of the Beefy Crunch Burrito Movement. When Taco Bell axed the Beefy Crunch from the menu a few years ago, Richard — a lifelong Taco Bell fan — started a social media battlecry. He ended up organizing over 40,000 Beefy Crunch loyalists, putting a full-court press on the chain for two years to bring it back.

In an effort to spread the word about his hard work and devotion to the Beefy Crunch Movement, Taco Bell made a documentary about Richard. You can watch it right here:

We had some additional questions for Richard, so we hit up the legend himself. Here’s how he made bringing back the Beefy Crunch Burrito a reality thanks to the help of social media.

How would you describe the first time you tasted the Beefy Crunch Burrito? How did you become such a devoted fan?

You have to remember that the Beefy Crunch Burrito came out long before the Doritos Locos Tacos hit the menu. So that bite into the Flamin Hot Fritos was a whole new experience at Taco Bell. I must have been unconscious to the fact these were only a limited-time promotion because my ‘devotion’ started the moment I was unexpectedly told they weren’t serving them anymore.

What are the origins of the Beefy Crunch Movement? When did you realize there was a strength in numbers to mobilize Taco Bell fans on social media?

The Beefy Crunch Movement started May 12th, 2011, the same day I was denied at my local Taco Bell. I suppose deep down the idea of using ‘strength in numbers’ was there from the start, hence creating a page and asking people to join. But when we hit 3,000 fans within the first 24 days, that’s when it started to get serious.

What was the defining moment when you realized that the Beefy Crunch Movement was actually a movement?

The defining moment when I realized this movement was having a real impact was when I was invited to their HQ in December of 2011. I’ll never forget that phone call.

What were some of the best and most memorable reactions you got from Beefy Crunch Burrito fans?

The best reactions I have seen have to be the FOUR Beefy Crunch Burrito tattoos. That’s right, four! And these are full on, undeniable burritos. That’s dedication beyond words. You also have Phillip from Louisville, KY who volunteered to do the Periscope giveaway. The road trips in 2015 were also incredible. Rebecca drove from California, some 4,600 miles round trip! Patrick drove 1,200 miles round trip, TWICE. Numerous other people driving hundreds of miles from out of state all because Taco Bell only brought it back in one town in Kentucky.

The Beefy Crunch Movement flag was genius. How did that start?

The idea of getting a flag and raising it at HQ came about after the Beefy Fritos Burrito was introduced on the menu full time in 2014. I wanted to give our movement a symbol that our community could rally behind, and that would send a message to Taco Bell that we would not give up in our pursuit of the Beefy Crunch. When they brought it back ONLY in Louisville, KY in 2015, that’s when the idea to order 100 and have people from across the country get their hands on them too. It very quickly became an iconic symbol of everything we have done over the last 5 years and became a manifestation of our Movement coming outside of our phones and into the real world.

How did the idea of Beefy Crunch Awareness Day start?

Beefy Crunch Awareness Days started as a way for us to internally recognize the progress we’ve made (giving posters or gifts etc..) but also for us to rally together to spread awareness. We settled on May 12th being Awareness Day as it ties in with the day this movement was founded. We also do similar events around December 20th to commemorate the birthday of the Beefy Crunch in 2010.

At what point did Taco Bell reach out to you guys?

Taco Bell first reached out to us in December of 2011 with the invite to the HQ to help with the 2012 promotion. We had on and off conversations in the coming years, but the conversation didn’t really resume until November of 2015. Since then our relationship has been awesomely positive and collaborative.

You guys got to test the Beefy Crunch Burrito in Louisville when Taco Bell brought it back a year ago. What was the response like locally at the time?

Well I’m sure locally people were ecstatic. It was the response of the rest of the country, however, that made the test in Louisville memorable. People from coast to coast pooled funds and had ‘ambassadors’ in Louisville go out and buy Beefy Crunch Burritos on their behalf. It’d both boost sales, and also spread awareness! Phillip was the most notable ambassador Periscoping his giveaway LIVE from the Big Four Bridge. One of the recipients of the giveaway burritos drove down from Indianapolis just to get his hands on one. In fact, he was one of MANY who ended up driving thousands of miles to get Beefy Crunch Burritos.

Was it tough to stay tight-lipped about the return of the Beefy Crunch Burrito before the announcement that it was coming back?

It was incredibly tough staying hush about the comeback. One of the things that makes this movement so successful is that this is grass roots and from the beginning I have been standing at their side. Having knowledge that I can’t reiterate to the group, puts me in a place they couldn’t relate and as a result created minor dissension among the newcomers. But you know what — ultimately I know I am representing everyone’s best interests at heart and the community has been quick to come to my defense, which was awesome to see.

How has The Movement rallied around making the Beefy Crunch Burrito the most liked burrito on Instagram?

The movement rallied behind the most liked burrito on Instagram as best it could by sharing and encouraging others to share with their friends and family. Thanks to combined efforts with Taco Bell, we were able to reach that goal of 50,000 likes and set a new record and add yet another social media milestone to our story. Believe me, this is just one of MANY.

Thanks to Richard’s dedication, the Beefy Crunch Burrito lived to see another day. But it won’t be here forever, so you should probably hit a drive-thru soon to take a bite into a legend.

What’s next on Richard’s movement-starting agenda?

Only time will tell…