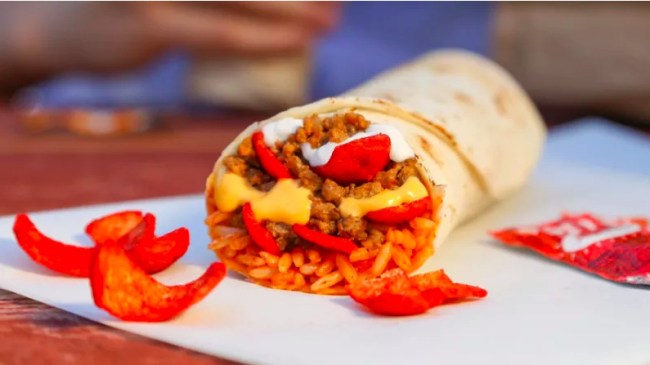 Taco Bell fans are some of the most rabid fans in the fast food universe. But back in 2011, the chain kicked the proverbial beehive when they discontinued a long-time fan favorite from their menu, the Beefy Crunch Burrito. The menu change was on the heels of axing The Cheesy Double Beef Burrito in 2010, creating for perfect storm of outrage.

Taco Bell briefly brought back the Beefy Crunch Burrito in 2013 with spicy Fritos, but it was a short-lived joy before being discontinued yet again.

In short, both are the perfect balance of bang-for-your-buck when you’re on a budget and hungry. It’s the perfect way to satisfy a craving  when you just have a couple crumpled dollar bills in your pocket.

When Taco Bell cut the Beefy Crunch Burrito for the second time, what they didn’t expect was a social media tsunami calling for its return. At that moment, a movement was born, much like the movement to bring back the soda Surge and French Toast Crunch.

Here’s the story of how Taco Bell fans put a full-court press on Taco Bell to bring their beloved burritos back from the dead.

The Beefy Crunch Burrito movement begins, along with a push for Taco Bell to get throwback items like the Cheesy Double Beef Burrito back on the menu. Rabid fans of the menu item start Beefy Crunch Awareness Day on May 12th. On that day, a movement officially begins.

On Facebook, two men named Richard and Philip started The Beefy Crunch Movement Facebook page. Together they used the page to count down the days since the last time the chain served the Beefy Crunch burrito, encouraging fans to petition Taco Bell to bring it back.

These weren’t just two guys crying into the wind, either. They made a flag for the movement (you’re not truly a movement until you have a flag) and accumulated more than 40,000 Facebook fans:

They even provided memes for ammo so fans could spread the word on Taco Bell’s social media pages:

It's Beefy Crunch Burrito awareness day, where we honor our beautiful snack stolen from us by the tyrannical @TacoBell #neverforget

UM HELLO I NEED $500 STAT SO I CAN GET A #BEEFYCRUNCHBURRITO pic.twitter.com/Ijr76shr94

The Beefy Crunch Movement celebrates this as a massive win.

Despite the ceasefire, people were growing restless. Conspiracy theories amongst Facebook commenters began to take root:

Meanwhile, hype for the Beefy Crunch Burrito reached a fever pitch, with some fans even getting tattoos to show their support:

The leaders of the Beefy Crunch Movement let their 40,000 Facebook fans know that “good things are coming.” After almost 900 days of fighting, dreams were becoming a reality.

AND THE NEXT DAY, FINALLY… THE BEEFY CRUNCH BURRITO AND DOUBLE CHEESE BURRITO ARE BACK!!!!

The reactions were instantly ecstatic, with some close to shedding tears:

How many tweets does it take to bring back the Cheesy Double Beef and Beefy Crunch Burrito? Too many to ignore.https://t.co/4U6UpLnlNC

On April 21st, the Beefy Crunch Burrito and Double Cheese burrito officially re-launched at Taco Bell restaurants nationwide for just a $1. Almost instantaneously after the announcement, fans flock and instantly share how much they missed their beloved burritos.

@tacobell so happy the #beefycrunchburrito is back, had 5 since thursday

And now that it’s back, some are falling in love for the first time:

When Taco Bell says “you brought it back,” in their commercials, it really is true — fans did bring it back, all thanks to the power of social media.