The Talisker Wilderness Bar: Bringing A Taste Of The Isle of Skye To The Canary Islands 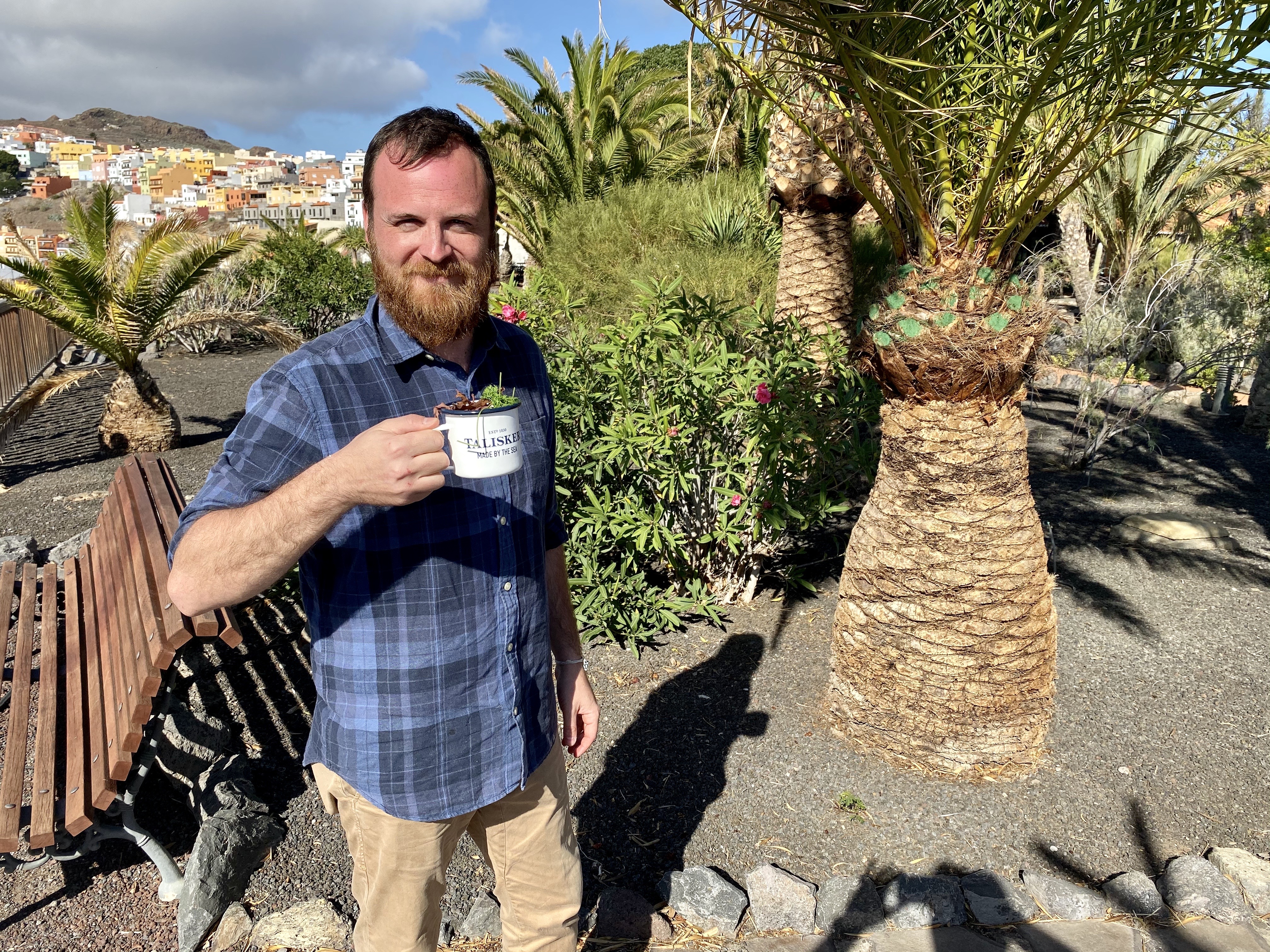 The Talisker Whisky Atlantic Challenge is currently underway, and last week while the rowers were anxiously preparing for their epic 3,000 mile row across the ocean, we were busy exploring the whiskies that made Talisker famous. Talisker is a Single Malt Scotch Whiskey from the Isle of Skye in Scotland.

Two events really stood out from the week. The first was a man-made oasis for cocktail lovers known as the Talisker Wilderness Bar. The second was a masterclass on how to make an Old Fashioned that is anything but old fashioned. 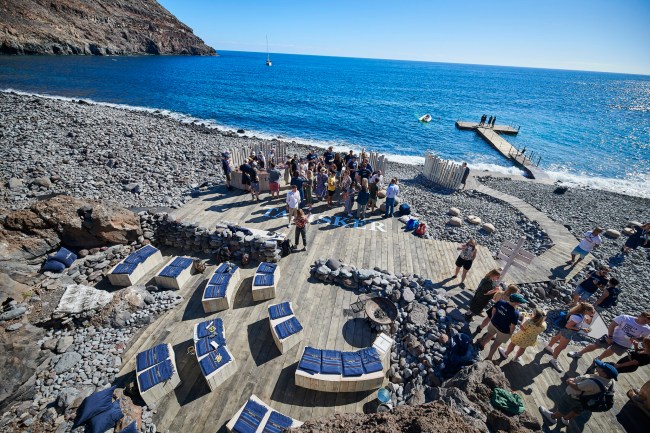 The Talisker Wilderness Bar might well be the most interesting venue in which I’ve ever drunk. It was built from scratch on an undeveloped beach that was only accessible by sea. They constructed two bars, a lounge area, fire pits, and even had Guy Ritchie’s FireTable on hand for cooking.

The Wilderness Bar was meant to bring the feeling of Talisker’s rugged, coastal home in the Isle of Skye down to the Canary Islands, and it certainly accomplished that goal. 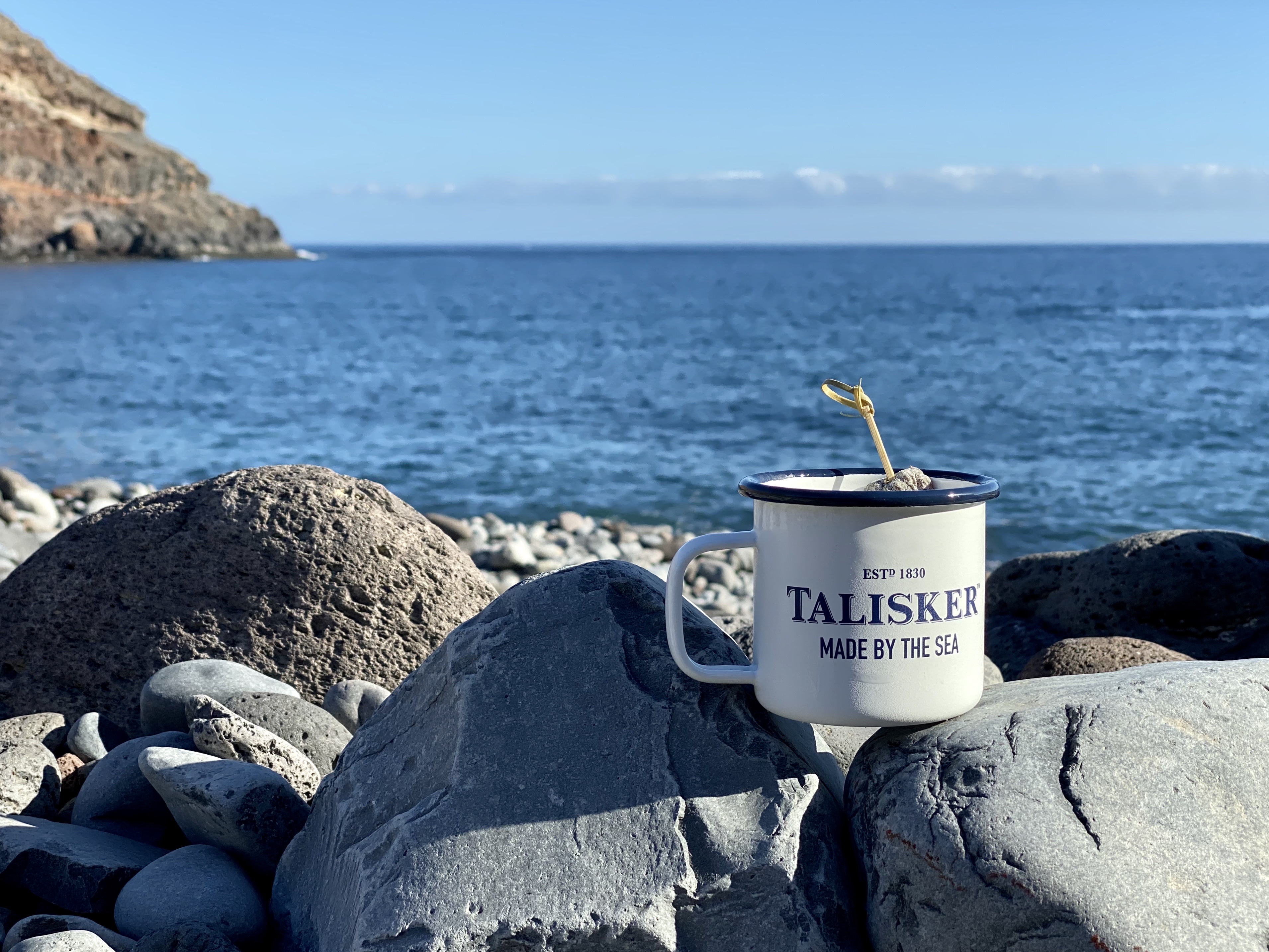 The “wilderness” aspect of the bar extended beyond just its remote location. Upon arrival, guests were greeted with a fittingly wild cocktail containing syrup made from fresh Alaskan salmon. It was the brainchild of Italian bartender, Giorgio Lupi, who is pictured at the top of the article. He won Talisker’s worldwide Wild Spirit Bartender competition and was invited to the island to serve his signature drink.

Lupi’s Jumping Whisky cocktail, named after the jumping that salmon do while swimming upstream, was comprised of Talisker 10, salmon syrup, egg white, salted lemon juice, and dill. To top it off, Lupi gives it a fine mist with Talisker 18 infused with oyster water and seaweed. It was perfectly balanced and really brought the sea into the cup.

The Wilderness Bar called to all sorts of wild spirits, with several well-known names gracing the island. Uber-bro Ross Edgely – known for completely extreme challenges like swimming all the way around Great Britain, completing a triathlon carrying a 100-pound tree, and running a marathon while pulling a car – gave an inspirational speech to the oarsman and adventurers about how events like the Talisker Whisky Atlantic Challenge are all about the inner battle, not about how people see you. 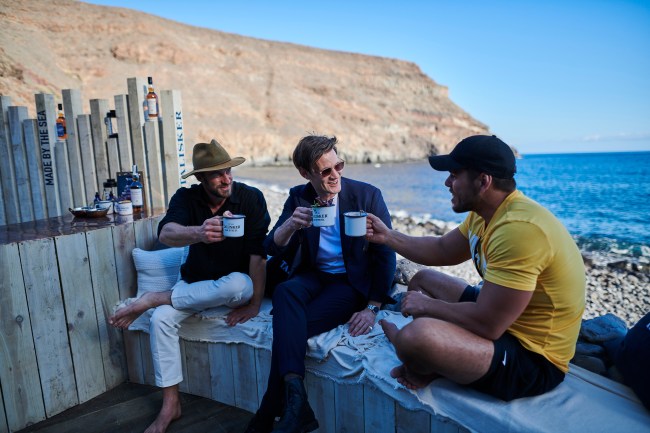 “Sometimes you just have to try to outswim your own sick,” said Edgely.

Professional filmmaker James Aiken sailed for over a week to reach the island, and even The Doctor himself, Matt Smith, stopped by for a drink and a chat.

While the Wilderness Bar showed off Talisker’s wild spirit, the masterclass put the whisky itself at the forefront. We started by walking through a guided tasting of their flagship single malt whiskeys, each with its own unique profile. The range is a bit like Goldilocks and the Three Bears – there’s something for everyone. 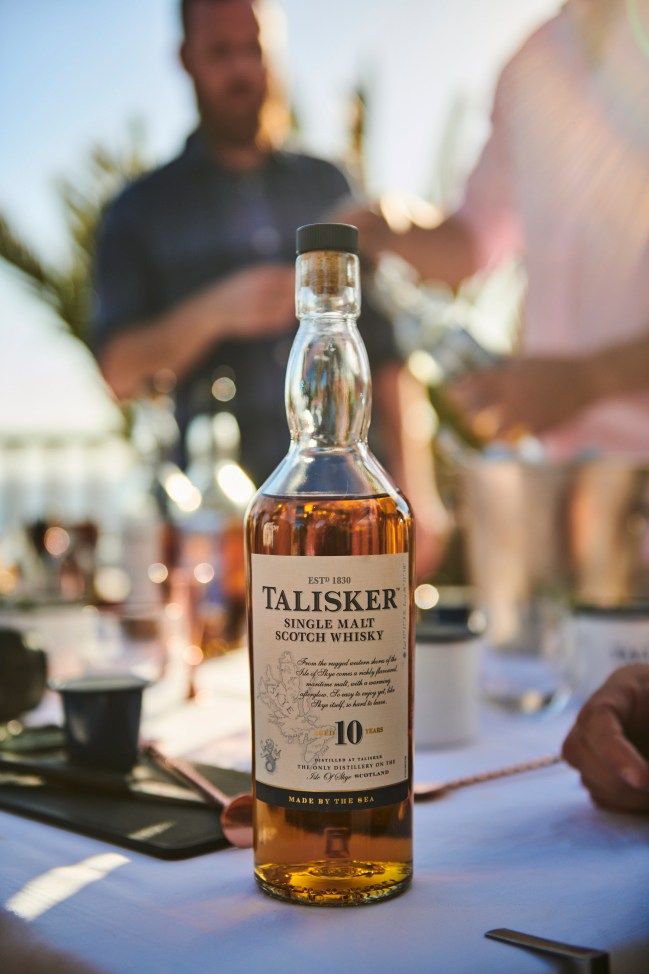 The Talisker 10 Years Old single malt is the benchmark of the range, and in this weird metaphor it would be the bed that’s just right for Goldilocks. It has a beautifully smoky profile with a level of peat that’s much more restrained than many of the Islay whiskies. It gives you a nice warmth without feeling like you’re drinking a liquid campfire. There’s a wonderful hit of red chile pepper that pops up to say hello about halfway through the sip, but it’s perfectly complemented by the saltiness that helps solidify Talisker’s Made by the Sea moniker.

Talisker Storm is the hard bed – my personal preference – and it most certainly earns its name. Storm takes that signature collection of flavors and amps it up until it crashes on your tongue. More wood, more brininess, more pepper. It absolutely coats your mouth, too, helping you savor it for even longer. The peat and smokiness are much more powerful, but again, Talisker stops short of a peat bomb. For a whisky looking to be in your face, it shows the perfect amount of restraint. 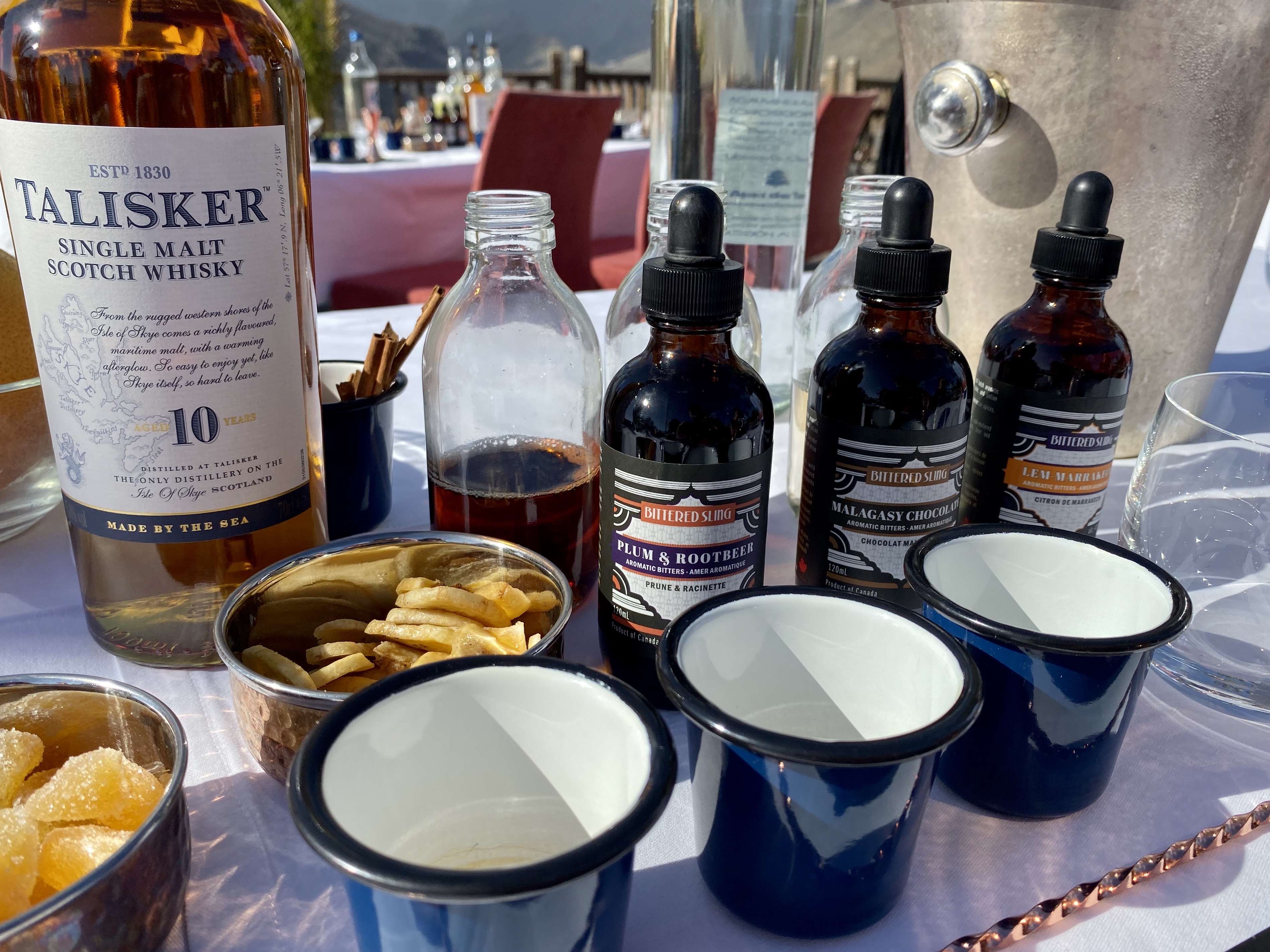 Those in attendance at the Talisker masterclass created their own Old Fashioned recipe from any of these three whiskies and a collection of other interesting ingredients. Honey and maple syrup stood in for traditional simple syrups. Root beer, chocolate and citrus bitters took the place of your basic Angostura. And there was no shortage of unique garnishes and final touches to be used.

While making my own Old Fashioned was enjoyable, it couldn’t compete with what was to come.

Just as we were about to leave, they rolled out the Golden Julep. It was a mix of apricot, passion fruit, and Talisker 10 Year Old with angostura bitters, cinnamon, thyme, and orange.

It’s a far cry from the simple 3-ingredient Old Fashioned, but it was the perfect end to an amazing adventure with Talisker. 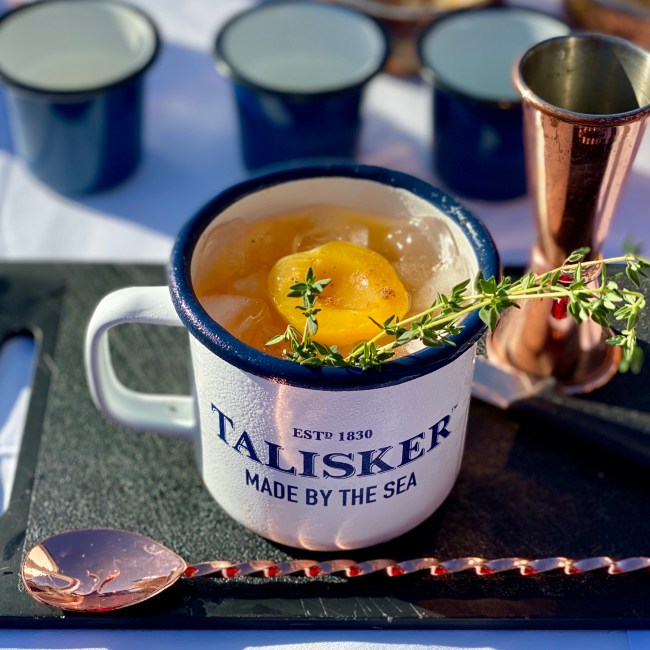