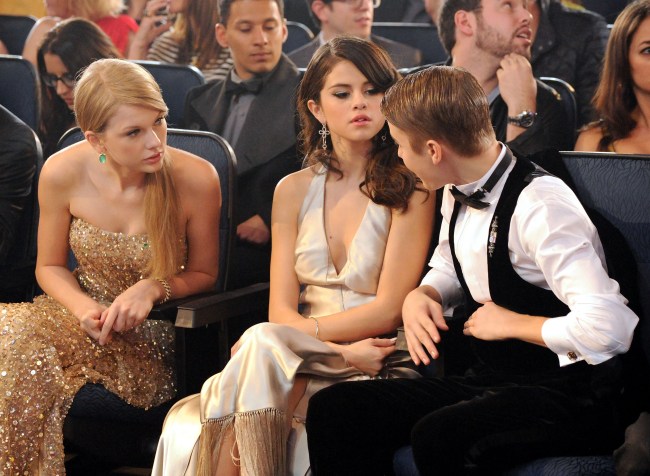 In overpaid singers news, Taylor Swift and Justin Bieber are having a tiff online right now. It all has to do with Bieber’s manager snatching up Swift’s music catalog and she is not happy about it.

It all started earlier on Sunday when manager Scooter Braun signed a $300 million deal to purchase Big Machine Records, which has and had several big-name country stars such as Rascal Flatts, Sugarland, Garth Brooks, Tim McGraw, Reba McEntire, Martina McBride, Hank Williams Jr., Trisha Yearwood and Taylor Swift. Tay Tay apparently can’t stand Scooter and is furious that he now owns all of her old songs.

Taylor went on the offensive on Sunday and accused Braun of “bullying” and claims that he tried to “dismantle” her career. Taylor wrote on a Tumblr post: “I learned about Scooter Braun’s purchase of my masters as it was announced to the world. All I could think about was the incessant, manipulative bullying I’ve received at his hands for years.” She said she was “sad and grossed out” by Scooter obtaining her music. But on the bright side, at least she has material to write sad songs.

RELATED: Steve-O Challenges Justin Bieber To A Fight In Place Of Tom Cruise And He Already Talked To Dana White About Fight

Braun is the manager for Bieber, Ariana Grande, Carly Rae Jepsen, Hilary Duff and Demi Lovato. Scooter now has ownership of her first six albums, which must really sting Taylor that her music is owned by someone who she absolutely despises.

Bieber came to the defense of his manager on Sunday afternoon with an Instagram post and started a catfight.

“First of all I would like to apologize for posting that hurtful Instagram post, at the time I thought it was funny but looking back it was distasteful and insensitive,” Justin wrote.

Bieber also defended Braun for a 2016 post that made fun of Swift, but Justin said it was totally his idea and Scooter had nothing to do with the derogatory post. Bieber says that Scooter advised Justin to not post it. Bieber said Braun “didn’t have anything to do with it and it wasn’t even a part of the conversation in all actuality he was the person who told me not to joke like that.”

“As the years have passed we haven’t crossed paths and gotten to communicate our differences, hurts or frustrations,” Bieber wrote. “So for you to take it to social media and get people to hate on Scooter isn’t fair.”

Bieber asked T-Swift: “What were you trying to accomplish by posting that blog? seems to me like it was to get sympathy u also knew that in posting that your fans would go and bully scooter.”

“Now Scooter has stripped me of my life’s work, that I wasn’t given an opportunity to buy,” Taylor said. “Essentially, my musical legacy is about to lie in the hands of someone who tried to dismantle it.”

Coincidentally, Swift’s father is on the board of directors at Big Machine Records and knew about the deal for at least a week.

RELATED: Justin Bieber Got A Face Tattoo For Wife Hailey Baldwin (Have We Not Learned Anything From Pete Davidson?)

“This is my worst case scenario. This is what happens when you sign a deal at fifteen to someone for whom the term ‘loyalty’ is clearly just a contractual concept. And when that man says ‘Music has value,’ he means its value is beholden to men who had no part in creating it.”

Taylor Swift allegedly liked a status that talked about Justin cheating on his ex-girlfriend Selena Gomez, who is also Taylor’s best friend. The post also tells Justin Bieber to get the “f*ck outta here.”

Maybe it won’t be Justin Bieber fighting Tom Cruise or Steve-O, but rather Taylor Swift in the octagon.

Here are Justin and T-Swizzle in happier times.