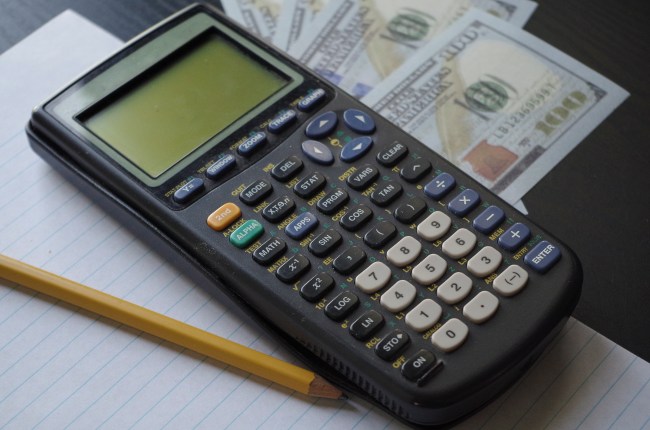 The TI-83 graphing calculator: the G5 of math. This puppy did work. At the same time, it was one of those devices where you knew you were only utilizing about 4% of its operating ability. I had the same math teacher sophomore and junior year and she was absolutely terrible. One of those teachers who explained things as though somehow the students were already blessed with the knowledge she held in her head? A lot of “I know you guys already know this, so let’s do this instead.” Bitch we don’t know this. Go back. Start from where your brain starts.

I have mixed feelings about the beast. On the one hand, I liked that Y= equation page that could actually show you how functions and graphs looked on a coordinate plane. Block dude was great. Some people on twitter are talking about Mario. Is that for real? I had no idea you could get fucking Mario on this thing, but that’s probably a good miss for me. On the other hand, going from a very simple calculator to this thing was tough. Always having to hit ALPHA to switch to the green letters, or 2nd to access the yellow trig functions, was annoying. By the time I was in calculus my senior year, I was toast. I got a 1 on the AP Calculus exam. That’s as bad as you can do. Fill in your name? That’s a 1. Granted, I was already in to college, we were just weeks away from graduation, and my mom had packed me a full mini-igloo cooler of lunch that day. The proctor said that once we finished the final section, we could eat our lunches. I mailed it in to get to my egg salad.

Today, writer Maya Kosoff for Gen Mag threw some serious shade at TI: “the U.S. education system has become addicted to Texas Instruments, which has a staggering, monopolistic hold over high school math.” (Gen Mag) I agree that there was a weird obligation to buy the TI-83. It seems absurd that a $100 calculator is a required tool for school. But why haven’t other companies built something better and cheaper? Isn’t that usually how progress works? This calculator has been around and unchanged for decades. I feel like Elon Musk could solve this in five minutes. But since neither he, nor anybody else, has come up with a superior alternative, then clearly, the TI-83 must be that good. Thriller, the Air Jordan 1, and the TI-83 calculator. How can you argue with staying power like that?

Was owning a TI-83 calculator ever required by your school growing up?

Our school provided them (not to keep). If you lost yours you had to replace it. People that lost theirs would steal someone else’s, go to the wood shop room, and sand off the number the school carved into each case to track them. Then the person they stole from would do the same

Ah, the cycle of theft. And don’t you miss wood shop? Nothing like bringing home a beautiful cigarette box for mom and dad stained brown from losing your index finger at 9AM.

My parents bought another brand of graphing calculator that was still pricy ($38). I remember being horrified when my teacher picked it up off my desk, waved it in front of the class, and said, “Don’t buy this. It’s not the real calculator.”

Monica ended up with a PhD so clearly it didn’t set her back too far.

They would watch us erase our calculators before tests because people would sneak notes/equation programs on them… I wrote a program that faked the erase screens.