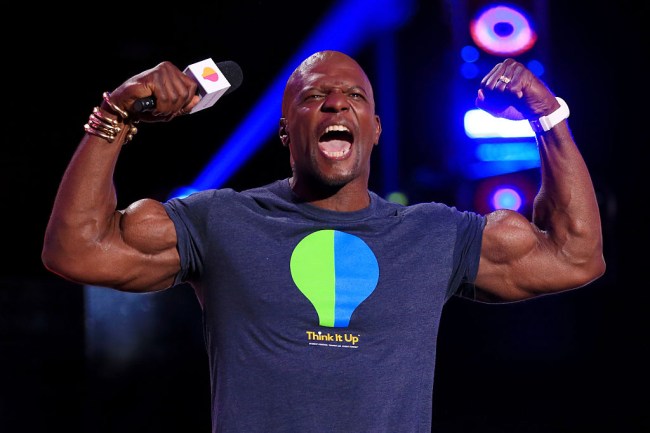 Terry Crews hasn’t been on an NFL team in 24 years, but at the age of 51-year-old, Terry Crews looks like he could be a professional football player or even a pro bodybuilder. Crews shared a photo of his amazing physique on Twitter, and the internet was in awe.

The Brooklyn Nine-Nine flaunted his muscles on Twitter as a way to promote America’s Got Talent, which he hosts.

In the mirror selfie, Crews’ showed off his chiseled stomach, engorged biceps and his back that looks like a mountain.

To keep in shape, Crews has been practicing intermittent fasting since 2012. He says intermittent fasting has “been a bit of a fountain of youth” for him. Crews doesn’t eat his first meal until 2 p.m. and eats as late as 10 at night. In his 16 hours of fasting, he will allow himself to drink coffee, tea, coconut oil, or amino acid drinks.

The 6’3″, 245-pound Crews utilizes a 24 workout, where he does four different exercises of six reps each (which equals 24). The former NFL player focuses on shoulders, back, core, lower body, press-ups, pull-ups, and bicep curls.

“For me, one of the most valuable biceps exercises is actually the pull-up,” Crews told Men’s Health. “A lot of people spend some time on barbells. For me, when I started to master the pull-up, my biceps really, really started to show.”

“I do tons of press-ups,” Crews adds. “And not just on chest day, sometimes two or three times a week. Simply just to warm my body up. It works. And it’s kind of like, if it ain’t broke, don’t fix it.”

Crews said he does “an hour or two lifting” four times a week and runs four miles on the treadmill after each lifting session.

Now, you know the celebrity diet and workout of Terry Crews so you can get in the best shape for 2020.