Ranking The 3 Greatest Golf Movies Of All Time 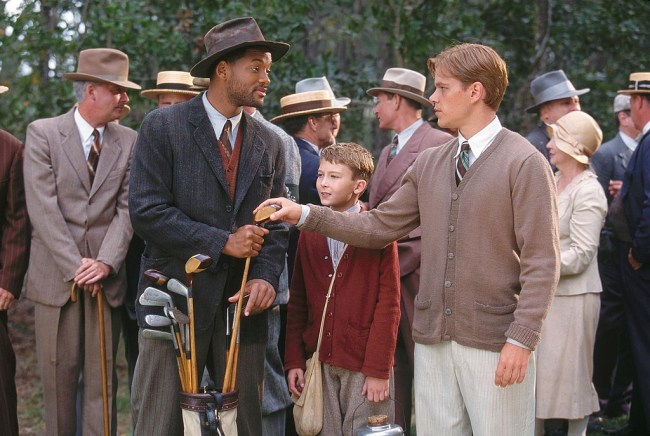 Debating about the greatest movies of all time is just a part of life. People have argued about movies for as long as they’ve been around and will continue to do so until the end of time.

The passionate arguments really come up when sports movies are involved and when it comes to golf movies, a category that’s lacking in quantity, most people have some very strong opinions. Golf fans will live and die by their list of greatest ever, but I’m here to tell you that unless they share the same Top 3 that’s listed here, they’re wrong and you shouldn’t listen to them.

The 3 Greatest Golf Movies Of All Time

Sorry, Tin Cup, you didn’t make the cut. Next time tell your boy Roy McAvoy to lay up.

If you ever, and I mean ever meet someone that says they don’t like Happy Gilmore you absolutely can not trust that person.

There’s also some golf involved, too, with Happy unloading on tee shots and putting with a hockey stick. Gilmore steps into a batting cage and takes baseballs to the chest, suffers a tragic loss and then gets hit by a car and still lives to tell the tale.

Most serious golfers that I know can reel off a minimum of 10 quotes from this movie, which shows you that it hits home with real golfers as much as it does general comedy fans.

“If I saw myself in clothes like that I’d have to kick my own ass.”

Sorry, but there is no way you can argue against the fact that Caddyshack is the greatest sports comedy of all time. The movie stars Bill Murray, Chevy Chase, Rodney Dangerfield and Michael O’Keefe for crying out loud. You could hate golf more than anything on the planet, but you would still love this movie.

While Happy Gilmore is the most quotable new-age golf movie, Caddyshack is the OG.

There’s nothing serious about this movie at all, but at the root of everything you have a local caddy trying to earn a scholarship to college instead of having to stick around his hometown and go to work at the lumber yard. His mentor is the local legend, badass golfer that shows him the way of life. In the meantime, you have a groundskeeper that loves to watch the local talent play golf while trying to kill a gopher.

That’s pretty much it. Plus you get young love, sex, drugs, plenty of booze and all the laughs you can imagine so there’s definitely something for everyone.

No. 1 – The Legend Of Bagger Vance

Not only is Bagger Vance the best golf movie of all time, it’s among the Top 10 sports movies ever made.

You have Charlize Theron, Will Smith and Matt Damon sharing a screen together and you also have a great feel-good underdog story set during the Great Depression that hits home with anyone that has a pulse.

Rannulph Junuh (Damon) returns to Savannah, GA an alcoholic after World War I, but an opportunity presents itself when his old girlfriend Adele Invergordon (Theron) decides to host a golf match between Walter Hagen, Bobby Jones, and Junuh.

Bagger Vance (Smith) literally appears out of nowhere when Junuh is trying to find his swing. If you can get past the fact that he randomly appears in the middle of the night out of thin air, then you’ll have no issue enjoying the movie. Vance becomes Junuh’s caddie and spiritual leader throughout the film as Junuh attempts to find the pre-war version of himself again.

You get the serious side of golf, the drama involved with the match featuring two of the greatest golfers of all time, the love story between Junuh and Invergordon and then the dramatics from Bagger Vance.

It’s incredible how many people you’ll talk to that have never seen this movie, golfer included, with such a loaded cast, and maybe it’s due to the fact it bombed in the box office, but nevertheless, Bagger Vance is the greatest golf movie of all time.