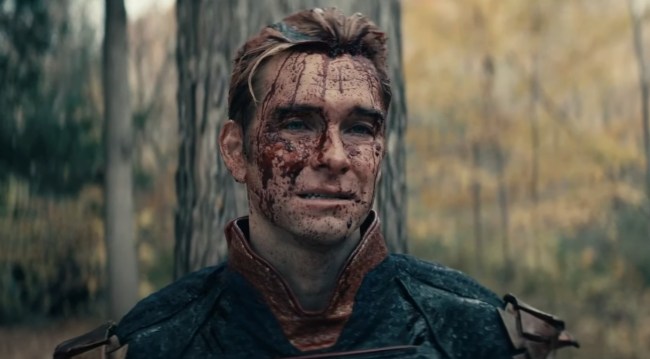 If you’re not all caught up on Amazon Prime’s hit subverted superhero series The Boys, then you should just fuck right off outta here, as Billy Butcher would say, ya cunt. And if you haven’t even *started* watching The Boys yet, then I’m not really sure what to tell you. We’ve been in quarantine for the last seven months — what the hell have you been doing?

The biggest compliment I can pay The Boys is that my roommate, who hates superhero content with every fiber of his being, absolutely loves this series. I pitched it to him as “a comic book show where the superheroes are the bad guys” and he’s been all in ever since. In fact, despite the fact that I literally work in entertainment, he binge-watched the insane second season before I did.

After allowing a couple of episodes to pile up the last few weeks, I finished the back-half of season two over the weekend and it exceeded my wildest expectations, particularly the blood-soaked finale. Not only did the finale bring a bunch of season two storylines to a conclusion, but it also tantalizing setup the already-greenlit third season — a third season that, based on comments from the cast and crew, sounds like it’s going to be even more insane than the previous.

“Season three is going to be so fucking crazy,” creator and showrunner Eric Kripke said. “Like even in the first episode, the first ten minutes of that episode there is a sequence that I will not give away that like literally every time we even talk about it I like cover my mouth, it’s so fucking bananas. But we’re also still going to go deeper into characters and keep exploring and really put characters forward, but f**k man, there’s crazy shit coming.” [via ComicBook]

“There are two words that Eric has said to me about Season 3. His description for Homelander Season 3 was, ‘Two words, homicidal maniac.’ That’s all I know,” Starr said.

“I’m actually looking forward to seeing Homelander off the leash. It’ll be really fun, just seeing him go unhinged and exact revenge,” he added. [via Collider]

Folks, if you thought Homelander was a murderous psychopathic lunatic before, those involved are letting us know that we ain’t seen nothin’ yet.

All eight episodes of ‘The Boys’ season two are currently streaming on Amazon Prime Video.