The Brilliantly Dumb Show Ep. 38: Joey Cold Cuts And The Differences Between American And International Weddings 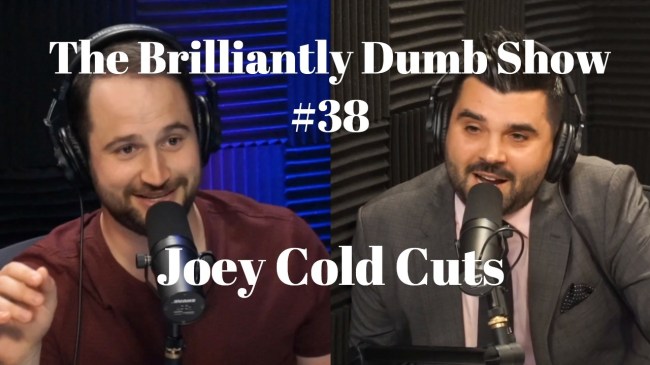 It was a matter of time until The Brilliantly Dumb Show brought in the big 6-foot-1, 235 pound Italian from Vancouver, Canada. Joey Cold Cuts is not only a friend of the pod but also the man who has a bet with Saquon Barkley on whether or not he can tackle the star running back once out of 10 tries.

Coming off an 8-day bender in France, Cold Cuts talks us through his time in the foreign land and the difference between American and international weddings. All hell breaks loose when we put him on the spot for reportedly requesting ‘Cotton Eye Joe’ to the DJ before the bride and groom could even say their vows.

In addition, he and I tell some wild stories of what it was like for us becoming friends at a luxury hotel in Beverly Hills. There are some must-hear stories such as myself driving Rudy Gobert his sneakers that he forgot at the hotel to the Staples Center before tip-off, which obviously led to me and Cold Cuts betting the Lakers knowing the star Jazz center did not have his sneakers.

It is a wild 30 minutes of an interview that leads to a guaranteed future appearance on the pod from the young man out of the great north.

Be sure to watch, subscribe and keep an eye out for Tuesday’s highly anticipated release of my interview with Navy Seal, Robert O’Neill, the member of Seal Team Six that shot and killed America’s most wanted man, Osama Bin Laden.