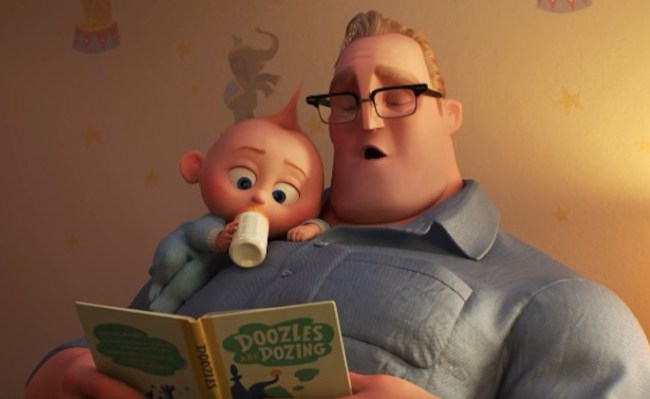 It’s been FOURTEEN years since Pixar released The Incredibles. To some, it was the best Pixar film of the era and it was a darn shame that the sequel wasn’t slated for sooner. But the wait is nearly over and The Incredibles 2 is just around the corner.

During last night’s coverage of the Winter Olympics in Pyeongchang, a new trailer for The Incredibles 2 hit the airwaves. It shows an exasperated Mr. Incredible trying to keep up with the exhausting reality of parenting and taking care of a baby by himself while his wife, Elastigirl, is out in the field fighting crime:

The Incredibles 2 will hit theaters on June 15th. That’s only 120 days from now. You could pull an Eric Cartman from South Park and try to cryogenically freeze yourself only to wake up and realize you’re thousands of years into the future and the otters have taken over. Or you could just chill out and wait for this film to hit theaters, and get stoked for Black Panther to hit screens tomorrow.

I’m trying to think of what major films are on the horizon between now and June, films where Pixar will run full-length trailers beforehand, and I’m not really coming up with anything. Usually, films of this magnitude like to piggyback off the success of other films by slotting that trailer in before other blockbusters. I’m sure there are some badass films between now and mid-June, I’m just drawing a blank at the moment.