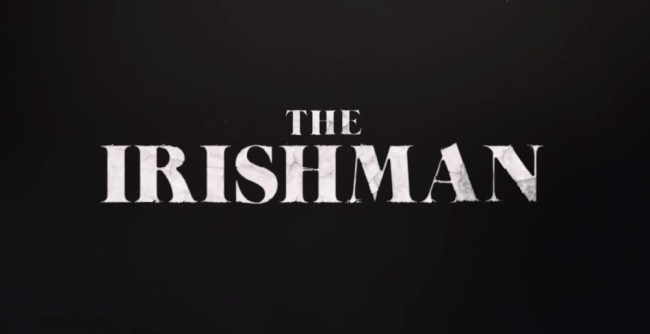 The first teaser trailer for Martin Scorsese’s The Irishman debuted during the Oscars on Sunday night, and the emphasis is on the teaser part. The teaser trailer did not have any footage from the upcoming movie with an all-star cast, but did have plenty of bullet casings.

The Irishman stars Robert De Niro, Al Pacino, Joe Pesci, and Harvey Keitel, plus it is directed by Martin Scorsese.

Put your money away because The Irishman will debut on Netflix. The movie is Netflix’s most expensive project yet and is said to be $175 million. The film centers around corrupt New York union boss Jimmy Hoffa and hitman Frank Sheeran in the 1950s and 60s. The story was taken from Charles Brandt’s 2005 non-fiction novel I Heard You Paint Houses.

Half of the movie will feature Pacino and De Niro as much younger versions of their characters. De Niro, who plays Frank Sheeran, and Pacino, who plays Jimmy Hoffa, will look 30 years younger thanks to visual technology that will de-age them.

De Niro, Pesci & Scorsese have 'Goodfellas' reunion on set of 'The Irishman' https://t.co/FAuxZu0FJD

The cast also includes Anna Paquin as Peggy Sheeran, Bobby Cannavale as Felix ‘Skinny Razor’ DiTullio, and Breaking Bad‘s Jesse Plemons as Chuckie O’Brien. The film also stars plenty of comedians, including Ray Romano as Bill Bufalino, Jim Norton as Don Rickles, and Sebastian Maniscalco as Joseph ‘Crazy Joe’ Gallo. While on The Joe Rogan Experience podcast, Maniscalco talked about what it was like to be on the set of a Martin Scorsese movie working with legendary actors such as De Niro, Pacino, Keitel, and Pesci

This is a long-awaited reunion of Scorsese and De Niro, who last worked together in the 1995 classic Casino. Before that they collaborated on Taxi Driver and Raging Bull.

While you don’t get even a glimpse at footage from The Irishman, you do get a reminder that Robert De Niro, Al Pacino, Joe Pesci, and Harvey Keitel all have an “i” in their name.

The Irishman will be in theaters and on Netflix this fall.