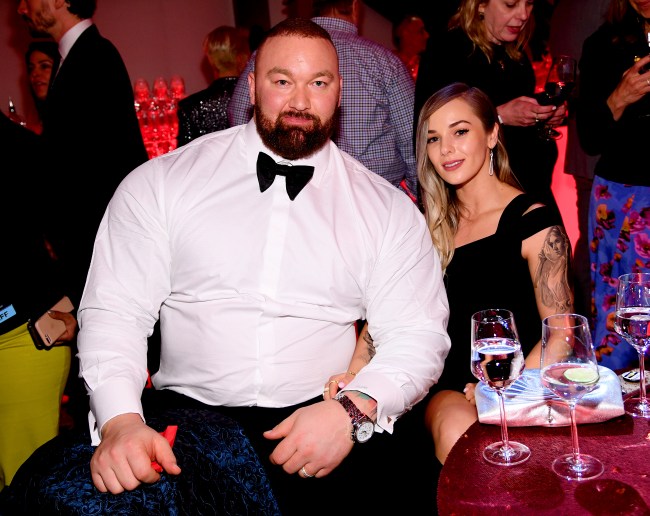 I live a decent life, but if a genie came down and offered me Hafthor Bjornsson’s life, I’d jump on that opportunity faster than I could say ‘I love you, mom.’

The 6′9″, 425-lbs Bjornsson is fresh off setting the world record for the elephant bar deadlift, just three weeks after he broke the deadlift record by lifting 1,042 pounds. Aside from being the strongest human being on the planet (officially), the 30-year-old is also a prominent character on one of the most universally beloved television shows of all-time, and married to a very attractive woman in Kelsey Henson.

This photo demonstrates a couple of those points.

After a Game of Throne’s screening of the first episode of the series finale at the Ziegfeld Ballroom in New York, Page Six caught up with the Icelandic strongman about his diet and what’s next.

“I had a great time on ‘Game of Thrones,’ ” he boomed. “I have a lot of offers for other acting work, but I am currently focused on a strongman competition in England. I am flying there — but I can’t fit my hips or my legs in an economy seat, so I have to fly business.”

He said that, off-screen, “I have been working out every day to prepare for the competition. I can lift 1,000 pounds, and I eat 10,000 calories a day. I have to eat every two hours to maintain myself.”

What a whirlwind the last few days have been! It was absolutely amazing to walk the red carpet with my husband @thorbjornsson at the last premiere of Game of Thrones Season 8. Big thank you to my stylist @mr_wein and hair and make up artist @tinnaempera for getting me red carpet ready, you guys are the greatest! 😘❤️ . . Dress @cushnie Suit @kingbrosclothiers

The Mountain has previously divulged his daily food intake and I feel very sorry for his toilet. He eats seven meals a day, starting  his day off with six eggs, six pieces of bacon and sometimes a cup of rice. The other six meals are interchangeable and repeated throughout the day. He then chomps down 250 grams (8.8 ounces) of ribeye steak with a side of 200 grams (7 ounces) each of rice, carrots, and red bell peppers. CNBC priced out Bjornsson’s weekly grocery tab based on prices from Trader Joe’s in New York City. The total price per week: $492.

I just call AAA. Must be nice to be able to literally move a motor vehicle with brute strength.