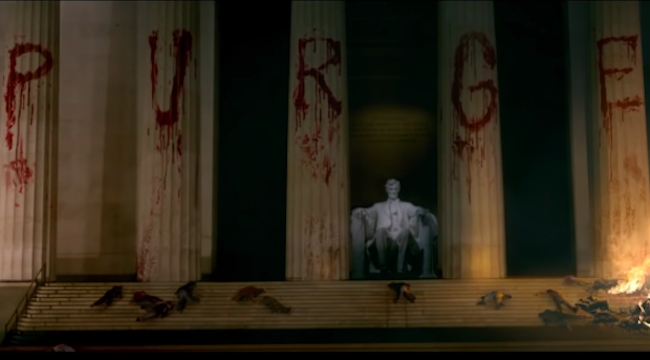 Oscar season is right around the corner and we’ve already been subjected to films like First Man and A Star is Born that are scientifically designed to appeal to the people who supposedly have good taste in movies even though they gave the most recent Best Picture award to a motion picture about a woman banging a fish-man.

I guess they must know something I don’t.

I got a chance to see most of last year’s nominees because no one had figured out how laughably unsustainable MoviePass’ business model was when they came out.

However, the real reason I was such a big fan of the service was that I no longer had to feel bad about dropping $15 to see totally mindless movies that couldn’t give less of a shit about winning awards.

I’ve always been a fan of films that don’t take themselves too seriously, which is why I’ve seen Tremors and Crank 2 more times than anyone should.

However, when it comes to guilty pleasures, there isn’t a single thing I enjoy more than The Purge movies.

I’ll admit I was slightly disappointed by the first Purge movie, which promised to thrust us into a world where crime is legal for a night but ended up being a pretty run-of-the-mill home invasion movie.

However, The Purge: Anarchy gave me everything I wanted and more by satisfying my thirst for over-the-top violence, illogically elaborate costumes, and sheer insanity.

The series followed that up with the guilty pleasure that was Election Year, and while this year’s installment was admittedly a bit underwhelming, it only left me wanting more.

Unfortunately, in the immortal words of Dave Matthews, all good things must come to an end sometime and it appears The Purge is no exception.

Entertainment Weekly spoke with Purge creator James DeMonaco, who revealed the next film in the series will be its last.

However, there’s a ray of sunshine on the horizon as DeMonaco says he has an ending in mind that will hopefully satisfy fans like myself who have an irrational love for the franchise:

“I have it in my head. I think I’m going to write it. I think it’s a great way to end it all. We want to end it all, I think, in this one, and I’m very excited.

When I came up with the idea and pitched it to everybody, they seemed psyched, and I think it will be a really cool ending, how we take this one home.”

Don’t cry because it’s over. Smile because it was batshit insane.