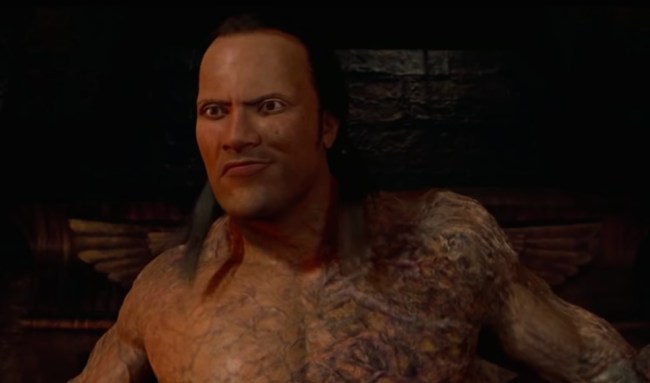 I love The Rock. I mean, come on, who doesn’t? The guy made a movie where he fought Mother Nature (San Andreas) and it almost made over half-a-billion dollars. That’s next-level star power. He’s Hollywood’s highest-paid actor, a wrestling icon to an entire generation, and one of the most-followed people on Instagram ON THE ENTIRE PLANET (for context, he’s going 11 million more than Kim Kardashian and 39 million less than Cristiano Ronaldo).

But do I love the Rock enough to give a shit about a reboot of The Scorpion King that he won’t even star in? Absolutely not. Now, while Johnson is not set to star in the film, his name is officially attached as a producer and he obviously sounds excited about the project, as the original 2002 film marked his first starring role in Hollywood.

“The Scorpion King was my very first role ever on the silver screen and I’m honored and excited to reimagine and deliver this cool mythology to a whole new generation,” Johnson said in a statement. “I wouldn’t have had the career I’m lucky enough to have had it not been for The Scorpion King and I’m thrilled that we at Seven Bucks Productions can help create those same opportunities for other hardworking actors today. I believe Jonathan Herman will put in the hard work to deliver a fantastic script for our global audience.”

They already tried rebooting The Mummy with Tom Cruise a few years ago and we all know how that went. Bet you already forgot about that one, didn’t ya? RIP to Universal’s “Dark Universe” LOL. The point is that if a Tom Cruise-led reboot of The Mummy didn’t work, why would a The Rock-less reboot of its lamer spin-off fare any better?