REVIEW: ‘The Trial of the Chicago 7’ – A Reminder That Progress Is Perpetual 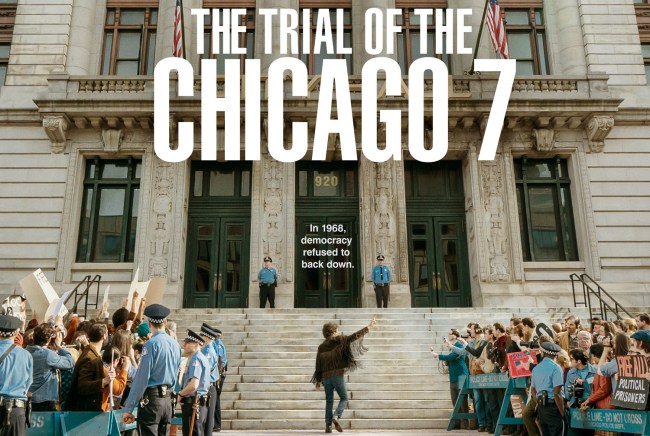 Movies have an innate ability to become whatever we need them to be. A shoulder to cry on. A laugh when we need it. A thrill ride. A warm embrace. After all, what makes a movie is not the content of the film itself, but rather, the person watching it.

It’s us who fill these films with meaning, with purpose. Hard as directors may try, the key to film becoming something more is not them, but you. How you feel. How you react. What you think. Movies are empathy machines, delivering us to emotional landscapes we might not have crossed otherwise.

And the idea that movies are what we make them is thoroughly encapsulated in The Trial Chicago 7, the latest film from Academy Award winner Aaron Sorkin.

Detailing exactly what the title describes — the 1969 trial of the “Chicago Seven” (Abbie Hoffman, Jerry Rubin, David Dellinger, Tom Hayden, Rennie Davis, John Froines, and Lee Weiner) — the film either comes at the perfect or the worst moment, depending on your perspective.

On one hand, the 1969 prosecution of the Chicago 7 highlights the unnerving reminder that the more things change, the more they stay the same — given the summer of social justice awakening we’ve had, you’d be forgiven forgetting that Sorkin’s latest doesn’t take place during the modern-day. Free speech and demonstration are disregarded as lawless rioting. The government and its supporters express an almost blind faith in the police. The term “radical left” is literally used to describe the protestors.

On the other, the film serves as a reminder that progress, revolution, and ultimately, true democracy, is not a goal to be accomplished but a war to be fought. Similar to fashion, democracy is never finished, never completed, but instead slowly, steadily, and unflinchingly dragged forward through history by those willing to bear the weight.

Depending on who you’re voting for in less than four weeks, the Chicago Seven will likely either been seen as troublemakers who got exactly what they asked for or civil pioneers sacrificing personal freedoms for the sake of the public’s progress.

Now, while I’m not about to tell you how you should feel, Sorkin certainly does, as he — in my opinion, deservedly — lays the empathetic heroism on thick, to such an extent that the entire movie feels less like an expression of art and more of emotional manipulation. But that’s what movies are, aren’t they? They’re empathy machines.

The Trial of the Chicago 7 isn’t all hamfisted do-goodery, though, as it comes packed with all of the Sorkinisms you’ve come to either love or loathe. While I’m usually one who appreciates the trademark zip of Sorkin’s dialogue, there are moments in Chicago 7 where that pattened brand of back-and-forth feels disingenuous, as it just doesn’t seem realistic that men potentially facing a decade in prison would be so consumed with delivering such a succinct soliloquy.

Luckily for Sorkin, the cast is so excellent from top-to-bottom — with Mark Rylance, Sacha Baron Cohen, Yahya Abdul-Mateen II, and Joseph Gordon-Levitt being the stand-outs — that even the occasional over-commitment to the Church of Sorkin is easily forgotten and forgiven given the sheer quality in which the lines are delivered.

Perhaps most striking of all — more than all the parallels — are the differences. Over a half-century since this very trial took place, the Vietnam War, then a point of contention, is now widely accepted as being an unmitigated failure. In hindsight, regardless of how you may feel about their methods, the Chicago Seven’s message and mission have been validated: they were right. And I can’t but wonder, and hope, that we’ll all feel the same about 2020 one day — that progress is perpetual and will only go as far as those willing to carry it will take it.

The Trial of the Chicago 7′ will begin streaming on Netflix on Friday, October 16.