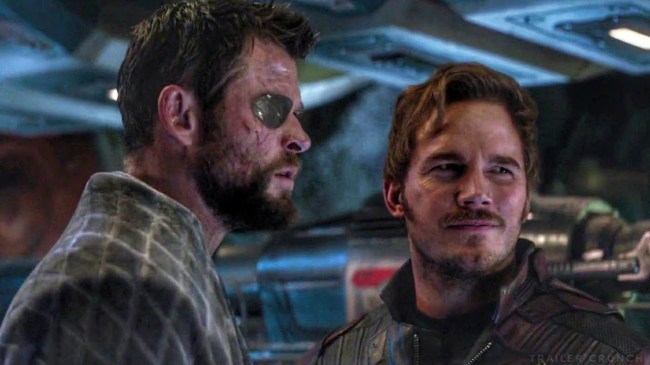 Did you know that Thor is the first Marvel Cinematic Universe character to get a fourth solo film? Considering how truly abject the first two Thor movies were — both are easily among the worst three MCU films — the resurgence the character has seen within the MCU has been nothing short of a miracle. Thanks to Taika Waititi’s creative vision and Chris Hemsworth’s underrated comedic chops, the character, and his franchise, have been completely revitalized, culminating in an Avengers: Infinity War/Endgame arc that saw the character do most of the dramatic heavy lifting.

Speaking of Endgame, the last time we saw the God of Thunder, he was tagging along with the Guardians of the Galaxy in Peter Quill’s Milano, arguing about who was really in charge. Given the confirmation that Pratt will be starring in Thor: Love and Thunder, it stands to reason that the film will likely pick up exactly where Endgame left off.

Production on Love and Thunder actually began last week, and newly leaked set photos have revealed that both Thor and Star-Lord will be sporting new looks this time around, particularly Thor, who seems to have shed all of his post-Thanos weight and regrown his iconic blonde locks.

Leaked set photos from 'Thor: Love and Thunder' show off new costumes for Thor (who is no longer thicc) and Star-Lord ⚡

Thor: Love and Thunder is undoubtedly shaping up to be the best Thor film yet. Academy Award winner Taiki Waititi is back in the director’s chair, and in addition to Hemsworth and Pratt, Academy Award winner Christian Bale is set to star as the film’s villain, Gorr the God Butcher, while Natalie Portman is set to return as Jane Foster, who will reportedly take on the mantle of Lady Thor. The stacked cast doesn’t stop there, as Matt Damon has also signed on for an undisclosed role (although it’s probably just a cameo, similar to his appearance in Thor: Ragnarok).