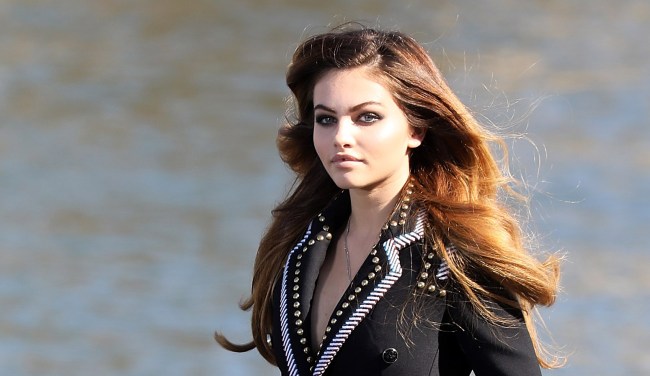 When she was just six-years-old Thylane Blondeau was “honored” with the title of “most beautiful girl in the world.” How such a thing was determined considering there are few billion of them on this planet is a mystery to me. As is why anyone would think that’s a title the world needed. But someone did and she won it. (That’s her when she won the award in the photo below.)

Fast forward a little over a decade and now, Blondeau, a French model and daughter of former Premier League player Patrick Blondeau, has been honored once again, this time with the title of “most beautiful face in the world” – which actually seems like a harder thing to determine since the number of people who qualify is even higher than her previous award.

All that being said, it’s nice to see that Blondeau hasn’t let the pressure of these lofty, completely-made-up titles go to her head and appears to be living a very good life.

I guess when you begin modeling at the age of four, this type of thing just goes with the territory.

Last year, Blondeau came in second on film critic TC Candler and The Independent Critics’ list of most beautiful faces behind actress Liza Soberano. I guess her face got better-looking over the past year.

On the men’s side of the ledger, Jason Momoa took home top honors for the most handsome face of 2018.

Oh, and if you are wondering how they came up with these lists, here’s what it says on their website.

Aesthetic perfection is only one of the criteria. Grace, elegance, originality, daring, passion, class, poise, joy, promise, hope… they are all embodied in a beautiful face. With those criteria in mind, TC Candler and the members select only 100 faces out of the approximately 85,000 female celebrities (which works out to less than 0.0012%). It is a thankless task, as no individual will ever agree with all of the choices. However, the general consensus has been that the INDEPENDENT CRITICS have created a celebratory list that cherishes the feminine aesthetic and opens the world’s eyes to a unique, diverse and international collection of beautiful faces.

And here were the nominations for each award.