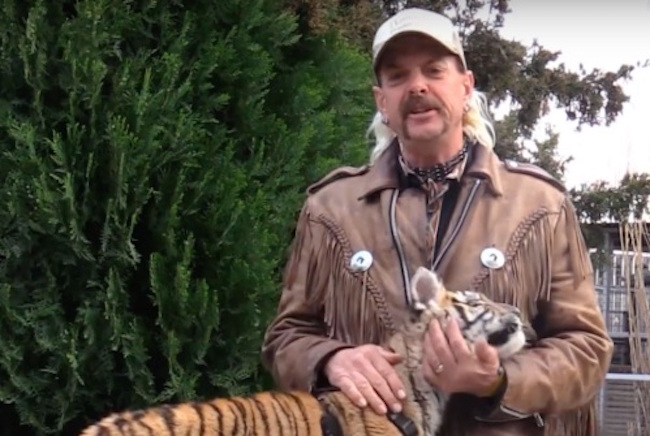 In what might be the most 2020 headline of 2020, Joe Exotic from the hit Netflix documentary Tiger King, has been placed “on COVID-19 isolation.”

Joe Maldonado-Passage AKA Joe Exotic from Netflix’s Tiger King, is reportedly in coronavirus isolation. Joe Exotic was sentenced to 22 years in federal prison for a conviction that included the two counts of murder-for-hire of Carole Baskin, as well as 17 other crimes. The big cat breeder and exploiter is allegedly taking precautions to protect

Dillon is 24, where as Joe Exotic is 57. He said that they used to talk three to five times a day, but after Joe Exotic was moved to coronavirus quarantine, Dillon has not spoken to him.

Dillon Passage, the current husband of Maldonado-Passage, appeared on Andy Cohen’s SiriusXM show that Joe Exotic has entered “a COVID-19 isolation.” Dillon said that Maldonado-Passage is in an individual quarantine at FMC Fort Worth, a federal medical center in Texas operated by the Bureau of Prisons.

“We speak like three to five times every day, but since he’s been moved to this new facility, they are putting him on COVID-19 isolation because of the previous jail he was at, there were cases,” Passage said of his husband, who is in his late 50s. “I’ve yet to speak to him since he moved.”

Dillon, who is Joe Exotic’s fourth husband, said he got engaged to Joe Exotic after only dating for two weeks. Dillon admits that he was in a “really bad place” when he met Joe. He added that he was “going through a lot of things” and was an “addict.” However, being around the animals at the Greater Wynnewood Exotic Animal Park gave Dillon a “purpose” and “actually doing something” in his life. “It brought me out of my depression. It was like my own little rehab.”

Dillon said that he never saw Joe Exotic abuse any of the big cats at the GW Exotic Park.

Dillon, who admits that he met Joe Exotic on Grinder, said he was swept off his feet when Joe Exotic sang karaoke and dedicated the song This Old Town to him. Dillon adds that he was addicted to prescribed narcotics, especially Xanax. Dillon said that he now only uses alcohol and smokes weed sometimes.

“I do love Joe, he’s been there for me through my darkest times, I’m just not going to dip on and abandon him when he needs me most,” Dillon said. He added that Joe Exotic never asked him to do any S&M activity. He told Joe drove him to get his nipples pierced. Dillon Passage might have something in common with Andrew Cuomo.

Dillon said that there was never tigers in the room when he and Joe had sex.

Dillon Passage said he didn’t mind that Travis Maldonado’s mother Cheryl was at his wedding with Joe. “She was at the park every day,” Dillon said. “I think that she was coerced into saying things on camera. She was always happy, she would always hug me.”

Dillon said that Joe Exotic hasn’t seen Tiger King since he is in prison, but he is enjoying all of the attention. “He was getting hundreds and hundreds of messages to his jail mail.”

Dillon said that he never had a prenup with Joe and is “very loyal” to Joe Maldonado-Passage while he is in prison. He also said that he made Joe take out his Prince Albert out before sex.

Dillon added that he learned a lot from the Tiger King: Murder, Mayhem and Madness, especially about Joe’s feud with Carole Baskin.

Dillon Passage said that he lives in Florida, and his current job is a bartender. “Joe’s a really good guy and he may have made some sketchy decisions, and I know he regrets them, but his intentions are really good at heart and he would do anything to help anyone in need.”