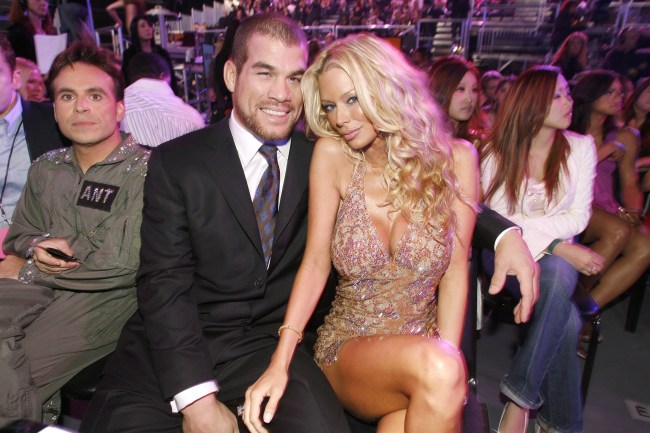 Tito Ortiz gave an insightful interview with VladTV, where they discussed a myriad of topics from his ex Jenna Jameson to his UFC days to his relationship with Dana White to his fight with Chuck Liddell to how he beat his own drug addiction. One of the more interesting aspects of the interview was Tito Ortiz detailing how his celebrity relationship with Jenna Jameson disintegrated because of her drug addiction.

Ortiz started dating Jenna Jameson around 2006 when the adult actress had peaked in the industry because she had previously co-founded her own adult site ClubJenna. The site was massively profitable, and reportedly earned estimated revenues of $30 million.

Tito believed he was in love with Jenna, and even passed up an opportunity to appear as the guest of honor at the United States Marine Corps birthday ball in November of 2006 because they refused to allow him to bring Jameson as his guest. Jenna was also infatuated with Ortiz at the time and stopped appearing in adult movies. The couple were in a loving and monogamous relationship. On March 16, 2009, Jameson gave birth to twin boys.

“I was in love with the woman, she is very smart, very bright woman, beautiful,” Ortiz said of Jameson in the interview. Then Jameson started using drugs, specifically OxyCotins according to Ortiz, she started a downward spiral.

“She was eating 80 milligrams three of four times a day, and it became an addiction problem that I saw an exact resemblance of my parents,” Ortiz said.

In the DJ Vlad interview, Tito expounded on how his parents were both heroin addicts. Tito’s dad was Mexican, and his mother was a mix of American, Portuguese, Irish, and French. He grew up in Huntington Beach, California, during the 70s and 80s, and both of his parents were addicted to heroin.

“We lived in motels, lived in trailers, lived in people’s garages, had a hard upbringing,” Tito said. “I hung around gangs in Santa Anna, California, Gang F-Troop I got jumped into. Just hanging around with the wrong guys, associated myself with the wrong people. I didn’t really understand it because my parents didn’t want to be parents at the time. They didn’t want to be responsible. My father had an addiction to heroin, my mom started using also.”

“One of my friends from a rival gang ended up getting shot and killed right in front of me and I was there, and I almost got shot,” the mixed martial artist said. “At that point, my mom was like, ‘I gotta make a change for my son.’ She told my father, ‘You either get sober or I’m taking away Tito.'”

“A week later, my mom wakes me up and says, ‘We’re leaving,'” Ortiz said. “We left and we went back to Huntington Beach, she got remarried, and I got a second chance at life.” At that point, Tito started wrestling in high school because he loved the WWE and found he had a special talent. “Wrestling saved my life,” Ortiz said.

“I always knew that if you want to end your life or you want to ruin your life, heroin is the one to do,” Ortiz said. Tito said he has never used heroin because of how it ripped his family apart, but he has indulged in alcohol, marijuana, and meth, which he was addicted for a year and a half.

Ortiz said his meth use caused him to drop down to 180 pounds and he had “pimples all over his face.” “I didn’t recognize myself, I was turning into my parents and it scared the sh*t out of me,” the MMA fighter revealed.

At 19-years-old, Ortiz got sober, went to college, started wrestling again, and completely changed his life around, avoiding becoming like his parents.

Ortiz knew of the life-ruining dangers of drug addiction, so when Jenna started abusing OxyCotins, he became extremely worried for her, himself, and their children. “She was losing everything. She blew through $8 million in a four year period,” Ortiz alleges of Jenna’s drug habit. “I was taken aback by it.”

Tito confronted Jameson over her expensive drug addiction. “I told her, ‘You’re not gonna have any money one day,’ and she said, ‘I don’t care, don’t tell me how to spend my money.'” He told her that she’ll “find out the hard way.”

Ortiz said that every day he would come home, and Jenna would say how “sh*tty of a dad he was” or how “sh*tty of a fighter he was.” At that point, Tito said that was “the end of our relationship pretty much.” Tito’s therapist believes that Tito stayed with Jenna so long because he saw his mom in her, and he was trying to save her from the demons of drugs.

Ortiz and Jameson officially broke up in March 2013, and Tito was granted full custody of the twins. Ortiz claims that Jameson hasn’t been around their kids for “over six and a half years.”

“She just walked away, and it’s sad, but at the same time, she’s a victim of her own self,” Ortiz said of Jenna leaving her children. “I tried to help somebody I couldn’t help.”

“I know the truth. The things that were happening to my kids at the time were just mind-blowing,” Tito explained. “I’m just thankful now that they were young enough to not understand what was going on in the house, what was going on with them. They don’t remember her.”

Ortiz said that “being a single parent was hard,” but a year and a half later, he met his “soul mate” Amber Nichole Miller. “She saved my life, I finally had someone who supported me, I had someone who would lift me up, not cut me down every day.” Tito and Amber have been dating for over six years, and she says she treats his children “like her own.”