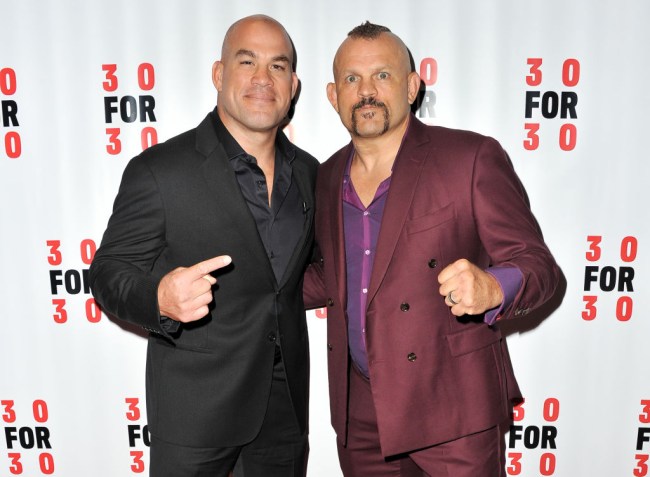 Tito Ortiz gave an interview to DJ Vlad. We previously covered eyeopening revelations such as his ex Jenna Jameson spent $8 million on drugs, hasn’t seen her kids in over six years, how the MMA fighter’s parents were heroin addicts, and how he beat his meth addiction. Now, we’ll delve into Tito’s fighting career, his bout with Chuck Liddell, the Alberto Del Rio fight, what he thinks about Dana White, and the current status of the UFC.

Tito Ortiz has had an illustrious MMA career with a total of 21 wins, 10 by knockout, in 34 bouts. Ortiz was also a trailblazer in the Ultimate Fighting Championship, making his debut at UFC 13 as an amateur in 1997 when he was still in college. The former Light Heavyweight Champion, who turns 45-years-old next month, is still fighting these days after signing a multi-fight contract with the Combate Americas. Ortiz is also an ambassador for Combate Americas, which was co-founded by Campbell McLaren, who is the co-founder of the Ultimate Fighting Championship.

Last week, Ortiz won his first fight in Combate Americas with a rear-naked choke submission of Alberto Del Rio in the first round. Ortiz put in a 19-week camp to prepare for the contest.

DJVlad asked Ortiz what his biggest payday was, and Tito responded that it was the second fight against Chuck Liddell. “I think they did 1.3 million pay-per-view buys, and I made about 2% of that,” Tito said. Ortiz was paid $1.8 million for the December 30, 2006, rematch at UFC 66 at the MGM Grand Garden Arena in Las Vegas, Nevada. Liddell defeated Ortiz in the third round.

The Ortiz-Liddell rematch grossed $90 million. Ortiz points out that the UFC made a lot of money off him, while boxers such as Floyd “Money” Mayweather are taking home a substantial amount of the purse compared to UFC fighters. “The UFC refused to do that, what they do is about the brand of UFC, it’s not about each fighter,” Ortiz said. “That’s what I stood for, that’s what I tried to battle for, and it didn’t happen.”

“If you fight between three to four times a year, it’s hard on the body, you’ve got to put in a three-month camp,” Ortiz said of the grueling fight schedule.

“90% of the guys aren’t making great money, so they’re really paying for their camp, paying their trainers off, paying their bills barely, they have to fight for their next paycheck.”

“That’s kinda the downfall for a lot of these guys. There’s no union. They’re not willing to step up and fight for their names,” Tito told DJ Vlad. “I’ve been one of the guys to kind of do that. I’ve been held down for not doing that. Talked bad about from promoters that I fought for prior. This is my business. This is my life. This is what I do for a living.”

“A lot of these guys fight paycheck-to-paycheck, and it’s hard, and the body can’t take that kind of damage,” Ortiz said.

Tito said he had both knees replaced, many disc replacements, reattached retina, 10-12 concussions. “I’m like the Million-Dollar Man.”

Tito Ortiz also talked about how Dana White assassinated his character. Ortiz was inducted into the UFC Hall of Fame prior to his final bout against Forrest Griffin on July 7, 2012, at UFC 148. But at that time, Ortiz was going through his battle with his then-girlfriend Jenna Jameson. Her alleged OxyCotin addiction caused Ortiz to get a restraining order, and he got custody of his two kids. At the time, Ortiz didn’t have the fire to be a UFC fighter.

“The way Dana treated me, it was just very disrespectful, he was trying to assassinate my character left and right. My ex was on my neck all the time, she had her drug problem. I couldn’t live like that. I was just deteriorating as a person.”

“I signed a deal with Bellator, and I was getting paid the same amount of money that I was getting paid with the UFC, so it made sense to me, it made good sense with me,” Ortiz said. “It wasn’t working for me. It wasn’t working for me at all, so I had to walk away,” Tito said. “I year later, I signed a deal with Bellator. I fell in love with the sport again.”

Ortiz alleges that Jenna Jameson assaulted him. “All of the sudden, I didn’t have someone at home attacking me all of the time verbally and physically sometimes,” Tito Ortiz said of the domestic violence.

On April 26, 2010, Ortiz was arrested for felony domestic violence against Jameson at their home in Huntington Beach, California. Jameson did later admit that she was being abusive and both recanted the allegations.

Ortiz said he never wanted to fight Liddell the first time because “he was my boy.” “The guy used to live at my house, he’d be in my training camp, we’d get each other ready for fights,” Ortiz told DJ Vlad.

“He sold out on me as a friendship, I lost a friend,” the former Light Heavyweight Champion said of Liddell. “The second time we fought, I wanted to fight. It was a match I lost because of mistakes that I did.”

Ortiz explains how the third fight against Chuck Liddell came to fruition. “Chuck actually calls me out and says he wants to fight me, and he’s coming out of retirement, and he wants to kick my butt. I just was laughing about it. All of the sudden people on social media are saying, ‘Oh you’re afraid to fight Chuck, you may not even show up to the fight.'”

Ortiz said he signed on with Oscar De La Hoya and Golden Boy Promotions for the rematch but later found out that this was their first pay-per-view they had ever done. Previous pay-per-view fights were all done by HBO. “They never did a pay-per-view before, they didn’t know what they were doing.”

“They didn’t market the right way, they didn’t have the right PR team doing the right things,” Ortiz explained. “Our pay-per-view was horrible, but I got the knockout in the first round, and I was happy.”

About the KO of Liddell, Tito said it “felt great, it felt a lot better than it looked.” The victory gave Tito a “rejuvenation” on his career because he “wanted to fight more.”

Ortiz was asked about his Mount Rushmore of MMA fighters, the top four fighters of all-time, and he said Royce Gracie, Ken Shamrock, Randy Couture, and himself. If he excludes himself, he would name Georges St-Pierre as the fourth greatest MMA fighter ever.

Ortiz talked about fighting Ken Shamrock AKA “The World’s Most Dangerous Man.” “I gave him an ass-whooping, I beat him down bad, I hurt my left hand, I hit him so many times that I chipped some bones in my elbow, to this date I still have chips of bones in my elbow,” the UFC Hall of Famer said.