An Unreal Tom Brady Streak Is In Danger Of Ending In The Bucs’ Upcoming Matchup Vs. Falcons 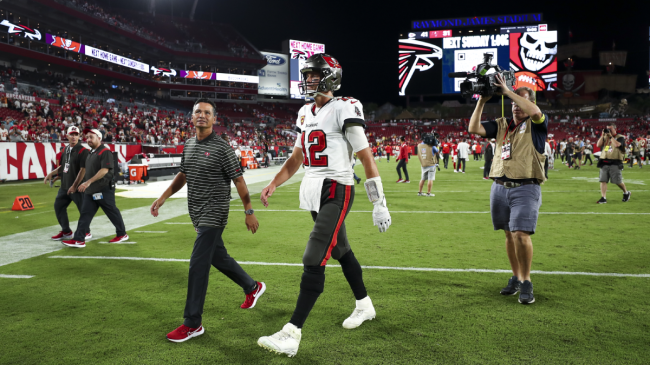 An unreal Tom Brady streak could come to an end on Sunday as the Bucs take on the Falcons in Tampa. The quarterback hasn’t lost more than two games in a row in two decades.

This year hasn’t quite gone how Brady envisioned when he announced his return from a brief retirement over the offseason. His offense has struggled, which has meant bad news for helpless iPads on the sidelines. And we’ve all seen the off-the-field headlines circulating throughout social media.

Now, another hit could come in the form of a streak-ending defeat at the hands of the Dirty Birds.

Brady has been beaten three times in a row just once in his storied career. That came way back in 2002, the signal caller’s second full season under center in New England. That campaign saw his Patriots lose four consecutive matchups to the Chargers, Dolphins, Packers, and Broncos on their way to a 9-7 season.

That also happens to be the only season in which a Brady-led team hasn’t recorded double digit wins.

Since that ’02 slate, Brady’s yet to see three straight defeats. It’s never happened while playing for the Bucs.

I suppose it’s time to pull out one of the most underrated stats in all of sports: This week, Tom Brady will attempt to avoid his first three-game losing streak in 20 years. Brady has lost more than two games in a row only ONE time in his career — all the way back in 2002.

It’s insane when you really think about it. I mean, take Peyton Manning for example. He lost at least three consecutive games, three separate times in his first season. It happened again two years later.

And to think about Brady’s 22 seasons in the NFL, it’s really quite remarkable.

On Sunday, though, Atlanta will have a chance to do the unthinkable. After dropping consecutive contests to Packers and Chiefs, the Bucs are in danger of losing three straight matchups.

Brady will try to shrug off the struggles seen over the first four weeks of the season. Luckily, he’ll get to face an opponent that he’s a perfect 10-0 against [insert 28-3 joke here]. He hopes that trend continues on Sunday, keeping this streak intact.