Following Tom Brady’s Sunday evening announcement that he would be running it back with the Tampa Bay Bucs for another season, football fans took to Twitter to crack jokes about what life must’ve been like for Brady and his wife Gisele Bündchen over these last two months that led him to make this drastic 180.

Gisele and Tom Brady the past two months pic.twitter.com/sNctCfPXc2

Gisele: “Tom can you please retire and come help me raise our kids?”

i want to say gisele is probably furious but i bet she realized what life is like with him home all the time and was like NO, NO, YOU BELONG ON THE FIELD

gisele after 2 months of tom at the house pic.twitter.com/vbguYJPDpC

Glad that Gisele Bundchen made her husband go back to work. pic.twitter.com/TixgWVqe1r

gisele: “hey tom can you please take out the garbage”

Gisele: “I DONT GIVE A FUCK IF YOUR A 7 TIME CHAMPION! WHEN YOUR DONE WITH A DISH PUT IT IN THE SINK AND CLEAN UP AFTER YOUR SELF! YOU CANT PUT THAT MANY CLOTHES IN THE WASH THATS HOW YOU BREAK IT!! GOD YOU DONT KNOW ANYTHING!!!”

gonna zag where everybody else is zigging and put my money on Gisele being like jesus you’re fucking tedious to be around, go play football some more you crazy-eyed freak or i’ll dump your hyperbaric chamber down a mineshaft with you in it

After being retired for just 40 days, Brady — a day after seeing 37-year-old Cristiano Ronaldo hang three goals on Tottenham in Manchester — took to social media to announce that, after spending the last few weeks reflecting, that he believes his place is “still on the field”:

Despite his two-plus decades in the NFL, the future Hall of Famer hasn’t shown any signs of slowing down as he was arguably the best player in the league last season, completing 67.5% of his passes for 5,316 yards, 43 touchdowns, and 12 interceptions.

Brady, a seven-time Super Bowl champion, has spent the last two seasons with the Tampa Bay Bucs, winning a title in his first season back in 2020. During the previous 20 years of his career, Brady was the quarterback of the New England Patriots, where he racked up a staggering six Super Bowl rings.

As for Gisele’s reaction to Brady’s decision to return to the NFL for a 23 season, the Brazilian megastar took to Instagram to show her support for her husband of 13 years: 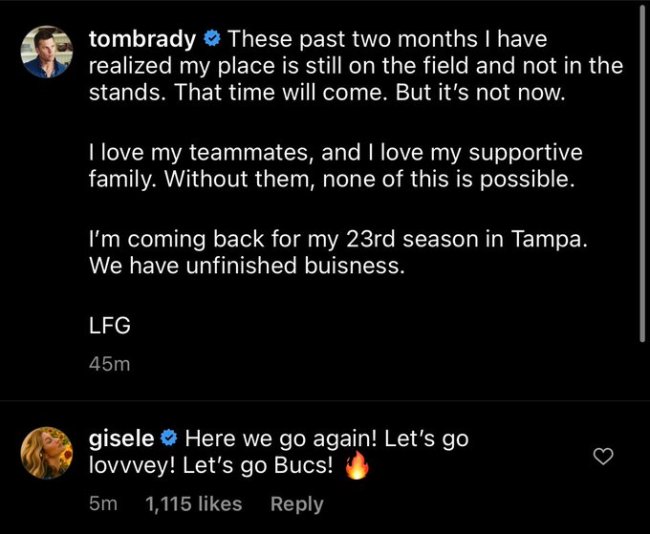 RELATED: The Guy Who Bought Tom Brady’s “Final TD Ball” For $500k Last Night Must Be Sick After Brady Announced His Return