Tom Brady Is Ruining How I View My Father 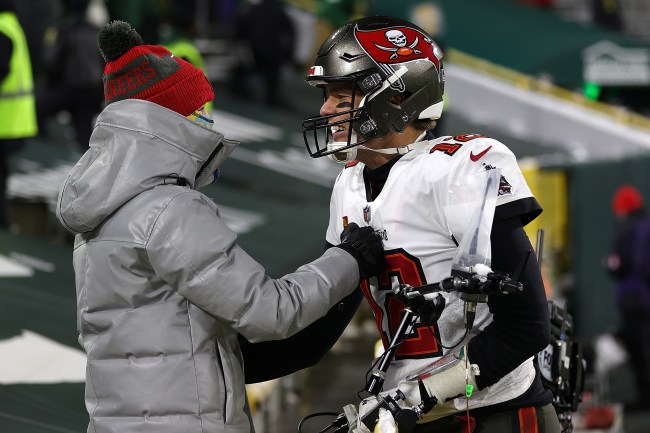 As sports fans, we’re accustomed to seeing ball players kiss the tiny heads of their adorable children after a big win. In basketball, the cameras frequently cut away to the squirmy, cherubic daughter in the stands—all pigtails and dimples, licking an ice cream or devouring popcorn with her warp speed metabolism. Who could forget Riley Curry stealing the show through the Warriors’ championship runs?

In football, Superbowl MVPs hoist little ones in their arms as they declare their intention to visit Disney World. In tennis, Roger Federer’s towheaded twins are as familiar to us as his Uniqlo apparel.

“I think the younger twins think this is a nice view and a nice playground- hopefully, one day they’ll understand. They come for the finals. It’s a wonderful moment for the family and my team. This one is for us.” @rogerfederer
💚💜💚💜 pic.twitter.com/6mWISzlBKF

But following the Bucs win on Sunday, I found myself shaken by a scene between Tom Brady and his 13-year-old son, Jack. Look at this “kid” bounding down the steps to see him:

Tom had to ask the security guard to let his son through, because clearly the security guard thought that Tom’s son was just some independent young man, hunting for autographs to sell on his eBay page to help pay for his masters degree in hotel management.

Tom Brady is so old that I see more of myself in his kids than I do in Tom. Meaning, I can relate more to being 13 than I can to being 43. I am the son in that scene. Which makes Tom Brady my dad. Which really reminds me that MY dad… is not Tom Brady.

Yesterday, Jack watched his dad beat the Green Bay Packers en route to his 10th Superbowl appearance. In attending the game, Jack probably had to finish his challenging U.S. history paper on the effects of the Teapot Dome scandal on Warren G. Harding’s legacy prior to the game. He may have had chores that morning—chores which include the use and operation of machinery unsuitable for a child. Which, mind you, he is not. He’s a man now, according to many faiths.

The problem here is that I can’t help but put myself in Jack’s shoes. Because I remember being 13. And I can tell you this: at no point during my 13th year did my dad ever make his 10th superbowl. I’ve never had to ask a security guard permission to give my dad a hug. Dad never moved to Florida and turned things around down there.

I don’t know why this hit me so hard. I suppose I just assume that most athletes retire before their kids are old enough to know what’s what, and then they can become parents and real dads who constantly reference past accomplishments to validate themselves. Sure, it has more merit when their dominance on the field came against the Saints instead of some New Jersey prep school, where all the equipment was somehow made of wood, but it’s still in the past. And the kids will roll their eyes. Because they’ve heard these war stories a hundred times.

I’m proud of my dad and love him very much. But dear God, I wish Tom Brady would stop rubbing his dadness in our faces. Let us admire our dads’ mediocre accomplishments in peace; you’ve made your point.