People Are Very Pressed That Tom Cruise Had A Private Jet Fly 5,500 Miles To Deliver 300 Cakes 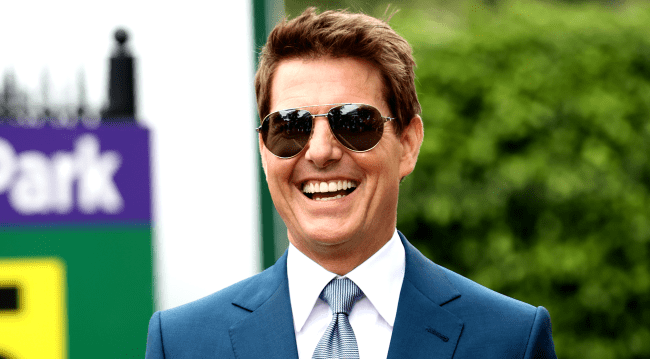 Happy Tom Cruise Day! It has to be Tom Cruise Day today, right? After all, this is the day that Rain Man and Mission Impossible: Ghost Protocol were released.

To celebrate, how about we have some cake? Tom Cruise looooooooooves cake.

In fact, Tom Cruise loves cake so much that he recently had a private jet fly 5,500 miles round trip just to deliver 300 cakes from a bakery in Los Angeles to his Mission: Impossible crew in London.

“Tom wanted to give the team on Mission: Impossible a treat for Christmas and decided that only cakes from his favorite bakery in LA would do,” a source told The Sun.

“He organized for the shop to make 300 cakes especially and they were then flown back to the UK on his jet.

“It is extravagant, but Tom is an incredibly generous person and he wanted to do something special for everyone who has worked on the movie with him.”

Considering this particular film crew has been working on the latest Mission: Impossible film for over 18 months, thanks to having numerous breaks due to health protocols, a little cake is the least Cruise could do for them.

Filming on Mission Impossible 7 was originally supposed to begin on February 20, 2020. After false starts and two hiatuses, followed by a large fire that broke out on a motorcycle stunt rig, it actually began on September 6, 2020. On October 26, 2020, they stopped filming again after 12 people tested positive.

Add in the fact that the protocols were different in all of the places the movie is being filmed, Italy, Norway, England, Switzerland, Poland, and the Middle East, and they certainly had to wonder if the movie was ever going to be finished.

So what’s so special about these cakes?

According to Stuart Heritage of the Guardian, who received two of those special cakes, “The story goes that Cruise first encountered the cake when Diane Keaton and Katie Holmes had a competition to find the best cake. Cruise tried Keaton’s offering and was immediately transformed. ‘This miraculous cake must be shared,’ he thought, and spent several years shipping hundreds of them to famous people all around the world. It’s true that his marriage to Holmes sadly ended in divorce. But, look, the main thing is that I got some cake out of it.”

I challenged Tom Cruise to send me two of his special cakes for Christmas. Did he deliver? Of course he did https://t.co/gdsFcY82V6

Reactions to Tom Cruise’s “extravagant” use of a private jet to deliver… cakes, were… predictable.

I mean, this is totally gross. Not just the gluttony but also the carbon footprint (or cakeprint). @TomCruise needs to find a greener way to show his generosity! Maybe @DoansBakery needs to set up a UK franchise ... maybe in Durham. I would totally support that ...

Great for the environment. Not.

What was in the mind of guardian journalist with his useless fluff piece about Tom Cruise sending cakes on private jet ….. forgetting to mention the insanity of it all #ClimateCrisis #privatejets #waste

Half a tonne CO2e emissions per cake. More emissions than an african citizen per year. What #climateemergency eh Tom cruise. https://t.co/tkYijlJyiy https://t.co/fl8haMqgwI