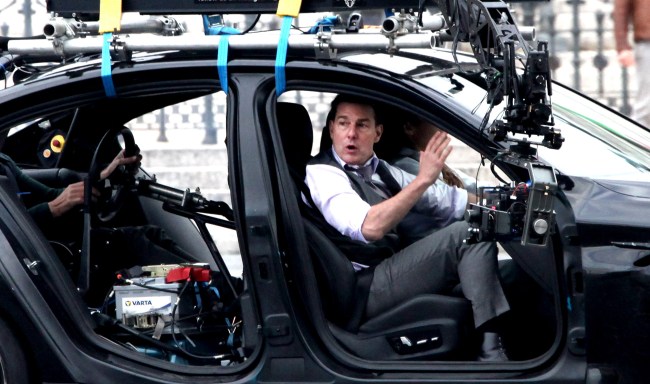 Earlier this week, Tom Cruise went viral for a scathing rant against some crew members on the set of Mission Impossible 7 in England for what he felt was some major violations of COVID-19 protocols.

“We are creating thousands of jobs, you motherf***ers. I don’t ever want to see it again. Ever!” Cruise shouted at the crew, among many other things, and f-bombs.

While some folks out there may view what Cruise did and said as a bit of an overreaction, not knowing the full context of the rant and the pressures Cruise is facing right now, one person who thinks he was justified is none other than George Clooney.

During an interview on Howard Stern’s SiriusXM show on Wednesday to promote his new film, The Midnight Sky, Clooney was asked about Cruise’s tirade.

“He didn’t overreact because it is a problem,” Clooney replied. “I have a friend who’s an AD [assistant director] on another TV show who just had the almost exact same thing happen with not quite as far out a response.”

Not that he would have gone off in the same fashion Cruise did.

“You’re in a position of power and it’s tricky,” Clooney added. “You do have a responsibility for everybody else and he’s absolutely right about that. If the production goes down, a lot of people lose their jobs. People have to understand that and have to be responsible. It’s just not my style to, you know, to take everybody to task that way.”

“I think it doesn’t help necessarily to point to specific people in that way and do that…but, you know, everybody has their own style,” Clooney continued. “The people who were on that shoot will tell us more about it. I understand why he did it. He’s not wrong at all about that. You know, I just, I don’t know that I would have done it quite that personally, but I don’t know all the circumstances so maybe he had it 10 or 15 times before.”

Thursday morning, The Sun reports that Cruise did it again going off on a second rant, and this time five staffers reportedly quit.

“The first outburst was big but things haven’t calmed since. Tension has been building for months and this was the final straw. Since it became public there has been more anger and several staff have walked,” The Sun reported a source telling them.

“But Tom just can’t take any more after all the lengths they have gone to just to keep filming at all. He’s upset others aren’t taking it as seriously as him. In the end, he’s the one who carries the can.”

He’s the one who carries the can. Truer words were never spoken. I think.