‘The Midnight Sky’ Review: George Clooney’s Gorgeous Heartbreaker Harkens Back To Sci-Fi Of The Past 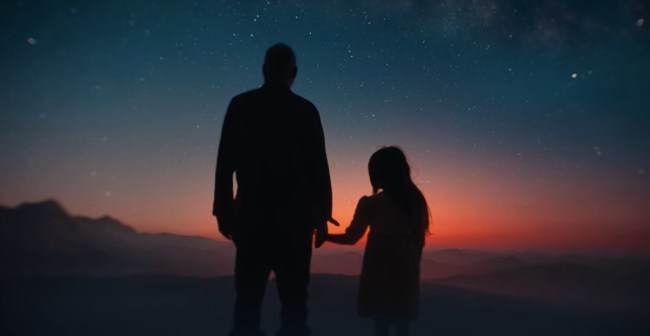 In a year deprived of blockbuster releases, I’ve had The Midnight Sky circled on my calendar for some time, as the pseudo-emotional space drama is perhaps one of my favorite subgenres. You know the Interstellars and Sunshines and Ad Astras of the world — the movies that use the vastness of space to introspect on our most private, human emotions.

George Clooney’s The Midnight Sky, while not as grand as some of its predecessors, succeeds in translating the sentiment of this naturally heartbreaking story, as the film soars when it leaves the space-set-pieces on the back burner and focuses on the existential hopefulness of humanity.

That said, the characters in The Midnight Sky — played by a stacked cast that includes the likes of Clooney himself, Felicity Johnson, David Oyelowo, Demián Bichir, and Kyle Chandler — aren’t given all that much to do other than what the basic mechanics of the plot allow. All of the performers put in professional shifts, but the only one really tasked with carrying any significant dramatic weight is Clooney, who does with aplomb when called upon. If this film does score any performance nominations (it wouldn’t surprise me if it competes in the technical categories like Original Score and Cinematography), it’ll be for Clooney’s performance as Dr. Augustine Lofthouse, who anchors this story as a truly hopeless man setting out to end his life with some semblance of purpose in a ruined world that provides anything but. The premise could — and at times, does– feel hokey and cliche, but the combination of Clooney’s performance and the audience’s tolerance of such a story (I, personally, enjoy this vein of sci-fi) largely overrides that concern.

Aesthetically and sonically, The Midnight Sky is flat-out gorgeous as it uses the remote arctic and outer space settings to unleash the power of sunshine, or lack thereof. Netflix certainly didn’t pinch any pennies, as the film carries a reported $100 million budget, and that financial commitment was rewarded with a movie that is, if nothing else, physically beautiful.

As for the actual content, it inherently feels like a Netflix movie, which also simultaneously gives it the vibe of a throwback from the 1990s and early 2000s… and that’s sort of a great thing. Critics and audiences alike often wax lyrical about the need for original, non-franchise projects with big stars: this is what The Midnight Sky is, and for that, it deserves extra credit. This is the type of movie we grew up watching on TNT and AMC, and I love those movies.

It inherently feels like a Netflix movie, which also simultaneously makes it feel like a throwback from the 90s/early 2000s and that’s sort of a great thing. We wax lyrical about the need for original films with big stars and that's ultimately what THE MIDNIGHT SKY is.

Narratively, while some of the drama in The Midnight Sky’s second act is seemingly undone by the film’s trailer, the reason for why that’s the case becomes clear upon viewing. I don’t want to spoil it, so I’ll just say that I was a huge fan of the ending and thought the third act, and the major reveal in particular, elevated The Midnight Sky from being simply average to a legitimately quality sci-fi that succeeds in both entertaining and eliciting emotion, which, at the end of the day, is the ultimate goal of making movies.

The Midnight Sky will hit Netflix in the United States on Wednesday, December 23.