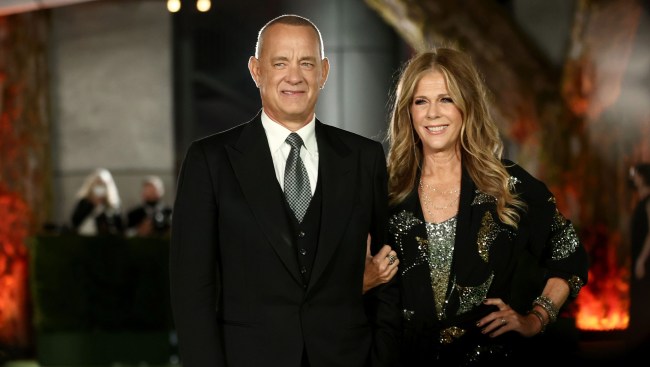 Diciembre and Tashia Farries got the surprise of their lives as they were having their wedding on the beach by Santa Monica Pier on October 22. It occurred when a uninvited, but very well known guest decided to crash the festivities: Tom Hanks.

“He said he noticed the ceremony and gave us many compliments and just said we looked beautiful,” Tashia told TODAY. “He gave us love advice and was just so positive and humble.”

The 65-year-old Oscar winning actor told Tashia, “I saw the ceremony from back there and it had to be one of the most beautiful ceremonies that I’ve ever seen.”

“We were so in our own moment so for him to walk up, it was shocking and took a second for us to realize,” Diciembre added. “It was the cherry on top for our big day.”

This isn’t the first time Tom Hanks has unexpectedly crashed a wedding. Back in 2016, Hanks showed up out of the blue as a newlywed couple were taking their wedding pictures in Central Park.

“We were in the midst of shooting and he just sort of walked up to us and introduced himself saying, ‘Hi, I’m Tom Hanks,’” photographer Meg Miller told the New York Post after it happened.

He even shared a selfie with the couple on Twitter.

It almost happened again in 2018 when Kristen Jenkins sent Hanks an invitation to her wedding to Joe Dobrin.

Hanks ended up not attending, but amazingly typed out a response, sending his regrets.

“Dear Kristen and Joseph, Here is a picture taken of me while I ponder if there is someway I can make it to your wedding,” he wrote. “Dang it, but I am in rehearsals for a play here in Los Angeles starting in May. Rats. Gotta send regrets. BUT, if you are in Santa Monica or Los Angeles in June, I will invite you to come see the production (from Shakespeare_ of the Falstaff stories. Let me know if you can be my guests. And, congratulations you kooky kids, Throw deep, Thanks – Tom Hanks.”